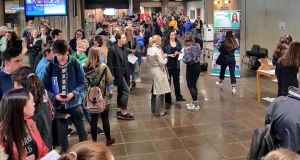 Students queue up to register to vote at Trinity College Dublin following a registration drive by USI.

As early as last January, when Government strategists began planning the timing of the abortion referendum, a single date stood out: May 25th.

“It was the only available window to ensure as many students as possible would be able to vote,” says a political source. “The following Friday was a bank holiday weekend; any later meant thousands of students would have been abroad on J1 visas.”

In the same-sex marriage referendum, young people – who are most likely to be liberal on social issues – played a significant role in boosting the Yes campaign.

Once again, as the gap in the polls narrows, students look set to be key in determining the outcome of the referendum on the Eighth Amendment.

For the repeal campaign, this has focused on boosting turnout among an age group where voter turnout is typically lower compared to older voters

The Union of Students in Ireland (USI) is the main group campaigning in favour of a Yes vote under the banner of “students for choice”.

There are, roughly, 250,000 students in third level, including part-time students. USI says a campus-based voter registration drive which started in September has signed up some 27,000 students who would not otherwise have been registered to vote.

(This number is well above voter registration drives ahead of general elections which tend to bring in 10,000 to 15,000 would-be voters, but behind its recruitment drive prior to the same-sex marriage campaign, during which USI signed up 28,000 in just a single term).

These new registered voters are in addition to a further 80,000 which USI says it has helped sign up in recent years.

“We’ve been out with forms, getting gardaí on campus to sign them. Students are very motivated. They know this is about their future and will affect them the most.

“We cannot make any change to our barbaric abortion laws without removing the Eighth Amendment. We will be on the right side of history, and we’re bringing hundreds of thousands of students along with us.”

In all colleges where USI is the representative body, students’ unions have voted by significant margins in favour of repealing the amendment, which guarantees an equal right to life to the mother and the unborn.

The margin differs significantly, though. While students were overwhelmingly in favour of repeal in Trinity College Dublin (80 per cent), the margin was lower in colleges such as University of Limerick (66 per cent).

No campaigners still feel they can win over significant numbers of students if they get a chance to hear the other side of the argument. Many feel they have not been given a fair chance to have their say on campus.

“I have been notified of pro-life groups all across Ireland being blocked from existence and denied budgets a fraction of the equivalent pro-choice group’s allowance on their campus,” says Katie Ascough, former president of UCD students’ union.

Ascough was impeached last year during her time in the position following controversy over a decision to withdraw abortion information from a student magazine and reprinting it.

While her detractors accused her of censoring information and costing the union money, Ascough felt she was upholding the law and was the target of a long-running campaign.

In many ways, the impeachment vote became a proxy campaign for the wider abortion referendum. In the end, 69 per cent of students voted to remove her.

“I have heard from dozens of students saying they are intimidated to voice their pro-life opinion for fear of backlash. That, to me, does not sound like choice nor, much less, freedom of thought.”

There have been numerous flashpoints across college campuses on both sides of the debate in recent months involving posters being taken down, attempts to interrupt talks or campaigners being ordered to leave.

In one case, Niamh Kearney, a member of Students Against Repeal based in Limerick and chair of UL’s LifeSoc, says she and other students were ordered to take down a stand they set up in the college courtyard by members of the students’ union.

“It is rather upsetting to believe that in this day and age our freedom of speech would be attacked in such a manner,” she says. “It’s difficult to comprehend that a campus so open to ‘choice’ didn’t respect our freedom to choose our own political views and standpoints.”

“They didn’t have the relevant forms . . . we’re [the students’ union] mandated to campaign for repeal, but we won’t stop anyone campaigning against it if they follow the right procedures. We’re for free speech.”

Yes campaigners, on the other hand, complain of their campus-based leafleting being disrupted by No campaigners within minutes of arrival of campus.

Online and social media, like with the wider campaign, are also vital battlegrounds in helping to secure the youth vote.

The #students4choice campaign is driving its message across Twitter, Facebook and Snapchat highlighting access to safe and legal abortion as an issue of equality and women’s rights.

The No side, meanwhile, is pushing a student-led #OurFuture campaign to challenge some of the “misconceptions around what a repeal would mean”.

“We’ve found that the majority of younger voters have been left in the dark about what the 8th Amendment is and what it means. Yet, we are being asked to repeal it?” says Our Future’s Gavin Boyne.

The campaign involving young people, many feel, is still to play for.

While the same-sex marriage referendum showed high levels of mobilisation a among younger voters, the impact on the result itself was limited. In fact, studies show that had younger citizens not come out, the Yes side would still have easily won.

This time around, poll results indicate the Yes side may be more reliant on voter turnout among young people.

The National Youth Council of Ireland, citing a RedC poll it commissioned last year, has estimated that as many as 22 per cent of those age 18-29 may not be registered to vote.

This would mean up to 150,000 young people in the State are missing out on their right to vote.

“We commend the work of the staff in local authorities and indeed the efforts of those such as our member organisations the Union of Students in Ireland and Spunout, all of whom have contributed to an increase in the number of young people registered,” says James Doorley, the council’s deputy director.

“We sincerely hope that the number not registered is not as high as 150,000.”