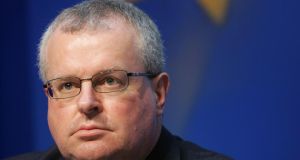 Paul O’Toole, who was appointed interim chief executive of the Higher Education Authority in October for 12 months. Photograph: Alan Betson

Several members of the Higher Education Authority (HEA) board raised concerns about the appointment of an interim chief executive after the former head of the organisation resigned.

Dr Graham Love announced in August that he would be standing down as head of the higher education body just 1½ years after his appointment. His resignation letter expressed frustration over the limits of the role in helping to reform the education sector.

Paul O’Toole was appointed interim chief executive of the authority in October for 12 months, having previously headed up Solas, the State body with responsibility for further education and apprenticeships.

He had previously been a chief executive of Tourism Ireland and general manager of Bord Fáilte.

However, internal emails show HEA board member Orla Feely, a vice-president at University College Dublin, was uneasy about Mr O’Toole’s “lack of any experience in higher education”.

“Given the concerns of the higher-education sector, which have been amplified by the nature of Graham’s departure, I believe that one immediate effect of this appointment will be to weaken confidence in the HEA across the sector,” she told the organisation’s board.

The internal correspondence was released to The Irish Times following a Freedom of Information request.

The board was given less than a day to consider Mr O’Toole’s appointment to the role, internal emails show.

On October 4th the chairman of the board, Michael Horgan, emailed other board members seeking approval for Mr O’Toole’s appointment.

Mr Horgan said he intended to inform senior staff at the HEA of the appointment at 11am the next day, subject to the board’s approval.

Dr Sinéad O’Flanagan, a senior lecturer at MIT’s Sloan School of Management in Massachusetts in the US, said she echoed concerns over Mr O’Toole’s lack of higher education experience.

Síona Cahill, president of the Union of Students in Ireland, said she had a “degree of concern” over the short period of time the board had to consider the appointment, emails show. Ms Cahill was also critical about the “level of information” given to the board ahead of the decision.

Several board members queried why a CV from Mr O’Toole had not been circulated, after which Mr Horgan provided one. Despite the concerns of some members, the board approved the decision via email, and Mr O’Toole’s appointment was announced the next day.

Dr Love’s resignation came amid growing frustration at senior levels of the HEA over what some saw as the authority’s lack of independence from the Department of Education.

Sources on the board stressed that the manner of the interim chief executive’s appointment had heightened these concerns.

The appointment of Mr O’Toole was discussed over several emails and phone calls between Mr Horgan and William Beausang, head of higher and further education in the department, prior to the board being informed, correspondence shows.

In an email several hours before the board’s approval was sought, Mr Horgan emailed the senior department official with a draft statement announcing Mr O’Toole’s appointment.

He asked if Mr Beausang wished to make any amendments. Mr Horgan also thanked the department official for his assistance in helping to fill the appointment.

The Irish Times contacted the HEA requesting a comment from the authority or Mr O’Toole, in response to the concerns raised by some board members over his higher education experience.

In a statement from the HEA, Mr Horgan said he was “delighted” to welcome Mr O’Toole’s appointment.

“We are fortunate to have such a professional public servant available to us to continue our work programme,” he said.

When the HEA was asked if Mr O’Toole wished to comment on the matter, a spokesman said while the chief executive was aware of the queries, given their nature related to his appointment, it would be appropriate for the board chair to respond on behalf of the organisation.