Coronavirus: Number of cases in the US passes two million

World round-up: Cases soar in Pakistan; Italian PM to be questioned by prosecutors 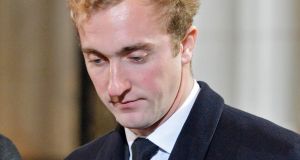 Prince Joachim of Belgium has been fined €10,400 by Spain. File photograph: Stephanie Lecocq/EPA 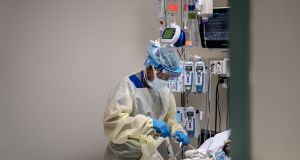 A coronavirus patient receives care at Elmhurst Hospital in Queens, US, in May. File photograph: Erin Schaff/The New York Times

The new coronavirus has infected 7.2 million people worldwide and killed at least 411,000, according to official figures tallied by Johns Hopkins University. The true toll from Covid-19 is believed to be much higher.

A potential Covid-19 vaccine being developed by Chinese researchers showed promise in trials in monkeys, triggering antibodies and raising no safety issues, researchers said on Wednesday. A human trial with more than 1,000 participants is under way.

In Pakistan, new coronavirus infections have soared past 5,000, as the World Health Organisation (WHO) urged the Pakistani government to impose a two-week lockdown to stem the relentless spike in new cases.

Pakistan has recorded 113,702 confirmed coronavirus cases and 2,255 deaths from Covid-19 in total.

Until now, Pakistan’s daily testing rate has hovered at about 25,000, but the WHO said it should be double that.

Prime minister Imran Khan has come under criticism from political opponents and health professionals for easing lockdowns despite soaring numbers of cases and no progress in tracking Covid-19 outbreaks.

The UK’s death toll from confirmed cases of Covid-19 has risen by 245 to 41,128, according to UK government data released on Wednesday.

In continental Europe, more nations have announced plans to welcome visitors again amid the prospect of a bleak summer tourism season for many.

Beginning on June 16th, Austria will open up to all European states with the exception of Spain, Portugal, Sweden and Britain, meaning that visitors from 31 countries will no longer be required to undergo a two-week quarantine upon arrival.

German chancellor Angela Merkel’s government has extended a travel warning for nations outside Europe through the end of August and urged Germans to avoid non-essential travel to the UK.

At the same time, German interior minister Horst Seehofer said that police will immediately begin scaling back checks on arrivals from Denmark, Austria, Switzerland, France and Italy, introduced to stem the spread of coronavirus, and that they will be lifted completely by June 15th.

Meanwhile, Greece will allow tourists to fly to Athens or the main northern city of Thessaloniki from June 15th.

Italian prime minister Giuseppe Conte said he will be questioned by prosecutors on Friday over the way the coronavirus outbreak was handled in the northern Italian city of Bergamo, one of the areas most badly affected by the Italian epidemic. The prosecutors are looking into why badly hit areas around Bergamo were not closed down early in the outbreak,

France’s death toll from Covid-19 increased by only 23 to 29,319 on Wednesday. On Tuesday, 87 Covid-19 deaths had been reported. But the number of new confirmed cases on Wednesday was 545; that figure had stayed below the 500 threshold during the previous three days.

France said it will end special government powers brought in to deal with the pandemic on July 10th, though it will retain the ability to curb gatherings and freedom of movement for four months.

Poland will open its borders with fellow EU countries on Saturday and allow international flights from next Tuesday, its prime minister Mateusz Morawiecki said on Wednesday, as the country unfreezes its economy despite an increase in coronavirus cases.

Spain has fined Belgium’s Prince Joachim €10,400 for breaking quarantine rules last month during a trip to the country, a Spanish government official said on Wednesday. The prince (28), who is the nephew of Belgium’s King Philippe, travelled to the southern Spanish region of Andalusia from Belgium on May 24th for an internship. He has been penalised for failing to quarantine himself for 14 days on arrival, a requirement for anyone entering Spain, the government official in Andalusia told Reuters.

The prince subsequently tested positive for coronavirus after attending a party in the city of Cordoba on May 26th.

New figures show the number of confirmed coronavirus cases in Africa has surpassed 200,000. The Africa Centres for Disease Control and Prevention said the 54-nation continent has 202,782 cases and 5,516 deaths.

While Africa still represents a tiny percentage of the world’s total Covid-19 cases, at well under 5 per cent, officials in South Africa and elsewhere have expressed concern because the number of infections continues to climb there.

South Africa leads the continent with 52,991 cases, with almost two-thirds of them in the Western Cape province centred on the city of Cape Town. Egypt has 36,829 cases and Nigeria has 13,464.

A justice in Brazil’s top court has ordered the nation’s health ministry to resume the publication of detailed reports on the nation’s coronavirus outbreak amid accusations that president Jair Bolsonaro’s administration was trying to hide numbers. Judge Alexandre de Moraes gave the government 48 hours to return to the format it had used up until June 4th, which included both daily increases in virus cases and deaths, as well as cumulative figures since the start of the outbreak. The ministry strayed away from that model last week, leading to claims from medical experts that it was trying to cover up numbers.

Brazil has recorded the second-highest number of cases in the world, and the peak of its outbreak is still seen as weeks away. – Agencies