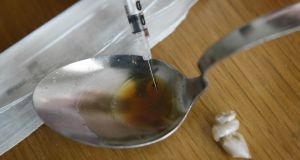 An organisation that applied for the tender said objections to the facility were misguided. Photograph: PA.

The development of the State’s first supervised injecting centre is in doubt following a Dublin City Council ruling that the facility cannot go ahead without planning permission.

The Health Service Executive last August issued a tender seeking a provider to run a medically supervised centre on a pilot basis for 18 months, under legislation passed by the Dáil earlier this year.

Users of the facility were to be permitted to inject illegal drugs, obtained elsewhere, under the supervision of trained health professionals.

Merchants Quay Ireland and the Ana Liffey Drug Project on Abbey Street both applied for the tender which was due to by awarded early this month with a view to opening the facility towards the end of 2017.

However, city business organisation the Temple Bar Company sought a declaration from the council that the centres would require planning permission. The council has ruled that the opening of injecting facilities at either Merchants Quay Ireland or the Ana Liffey Drug Project on Abbey Street would not be exempt from the requirement to have planning permission.

Merchants Quay Ireland chief executive Tony Geoghegan said the council’s decision was “very disappointing” and could delay the opening of the facility by up to a year, or could lead to it being stopped entirely.

“I am very disappointed that the city council has taken this position, given that the centre is in the Programme for Government and was approved under legislation.”

Mr Geoghegan said he was aware there was opposition to the facility, but said it was misguided.

“This is a new treatment modality, so I understand people objecting, but most of the anti-social trouble in the city centre is alcohol related. This would be a harm reduction facility, which would be taking drug users off the streets.

The Temple Bar Company chief executive Martin Harte said the council had made the right decision. “We are very pleased by this decision, but it is what we expected.”

The legislation which underpinned the facility was “flawed” Mr Harte said.

“It would effectively decriminalise the possession of heroin in the area where it is situated. These are not treatment centres and we firmly believe they will cause more problems in the city than solutions to the problems of drug users.”

If an application was now made to the council for an injecting facility, the company would make an objection he said.

“We would make an appeal if necessary. We would look at all and every option in relation to stopping these centres.”