Election candidate ‘wasn’t aware’ his poster was still up 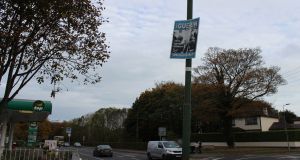 An election poster from Independent candidate Jimmy Guerin in the Dublin Bay North constituency, was last week still up on a lamp post in Killester 20 months after the 2016 General Election.

The election poster was secured to a pole on the Howth Road, in Killester, near a Top service station. Mr Guerin was not elected in the last General Election, he received 756 first preference votes and was eliminated after the second count.

Mr Guerin is a Independent councillor on Fingal County Council from the Howth/Malahide area of north Dublin, and was a former Fianna Fáil party activist. He is also the brother of the late Veronica Guerin, the Sunday Independent crime journalist who was murdered more than twenty years ago.

Speaking to The Irish Times Mr Guerin said he “wasn’t aware” the election poster in question was still up for more than a year after the February 2016 General Election, and said he would be taking it down in the coming days.

Mr Guerin said he had not received a fine or notification from Dublin City Council (DCC) in relation to the poster, and had not been fined for failing to take down any other posters from the election last year.

Candidates whose election posters are still up in public more than seven days after an election face a fine of €150 per poster from the relevant local authority.

In total 47 fines were issued by DCC for election posters that were not taken down following the 2016 General Election. Candidates must remove all election posters from street poles or other areas seven days after the vote.

One candidate was fined €3,450 for failing to remove 23 election posters within the legal timeframe following the election, according to a spokesman for DCC.

Due to data protection legislation the name of the candidate cannot be revealed, the council spokesman said. The majority of fines were issued for posters in the Dublin central area of the local authority.

Another candidate was fined €1,050 by the local council for failing to remove seven posters within the required timeframe, and ten individual candidates in total received fines from DCC.

The Green Party were fined for two posters that were not taken down, under the Litter Pollution Acts by DCC, and four fines were issued to Fianna Fáil for failing to remove election posters.

Man dead in ‘superloo’ for up to 20 hours before discovery 16:39
Mother of three McGinley children to appear in court 15:40
Injunction lifted as row over dog track protests resolved 15:28
‘Excuse of ignorance’ not open to ex-tax inspector jailed for not filing returns 15:19
Road traffic prosecution against Conor McGregor struck out 15:07
SUBSCRIBER ONLY