Number on Pandemic Unemployment Payment jumps by 12,500 in one week 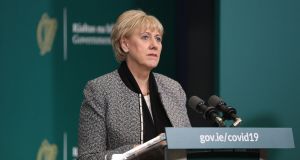 Minister for Social Protection Heather Humphreys said an increase in the number of Pandemic Unemployment Payment recipients was anticipated and reflects the impact of moving to Level 5 of restrictions. Photograph: Nick Bradshaw

The amount the Government is paying through the Pandemic Unemployment Payment (PUP) has climbed to almost €100 million a week following another increase in the number of recipients.

A further 12,500 people began to receive the payment in the past week, bringing the overall number to just over 342,500.

The Department of Social Protection said the total amount paid out under the income support scheme since it was introduced earlier this year has reached €4 billion.

The sector with the highest number of people receiving the payment this week is in accommodation and food services (just over 100,000), followed by the wholesale and retail trade (55,000) and other sectors such as hairdressing and beauty (30,000).

This week’s figures are in addition to the 200,000 people who were reported on the live register as of the end of October.

Minister for Social Protection Heather Humphreys said the increase in the number of recipients was anticipated and reflects the impact of moving to Level 5 of restrictions to curb the spread of Covid-19.

“I know so many people have made huge sacrifices as they continue to heed the advice of the National Public Health Emergency Team,” Ms Humphreys said.

“But the fall in the number of Covid-19 cases in recent days is encouraging and gives cause for optimism ahead of the upcoming Christmas period.

“Let’s all keep going together. We brought this virus under control before. It is within our gift to do so again.”

All Covid-19 Pandemic Unemployment Payments issued will be in recipients’ bank accounts or at their local post office on Tuesday, 10th November.

Applications for the scheme, which supports those who have lost their jobs due to the pandemic, have been extended until the end of the year.

A newly remodelled PUP system pays out on four rates ranging from €203 to €350 per week depending on what the individual was earning before losing their job.

New regulations mean that those who were employed before last February, but whose earnings were reduced since then, can still have their PUP payment rate based on earlier, higher earnings, the department said.

Self-employed people can also continue to earn up to €480 per month while also in receipt of PUP, take up the Part-Time Job Incentive Scheme or avail of standard jobseeker payments.