State must not be complacent about risk of homophobic attacks, says Panti Bliss 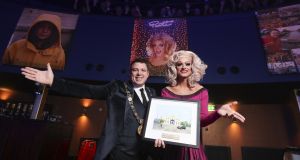 The Irish State must continue taking steps to combat homophobia and not become complacent about discrimination towards gay people because same-sex marriage is now legal in Ireland, equality campaign and performer Panti Bliss has said.

Speaking following the homophobic attack on Marc Power in Coolock earlier this week, she said she was shocked by the pre-mediated nature of the assault. “What was scary about it was that it wasn’t just some random thing that happened on the spur of the moment, they planned it and that is really horrifying.”

While Ireland has made huge advances in becoming a more open and accepting society, it still has a long road ahead in ensuring LGBTQ people feel completely safe, the performer said.

“People have the sense that we voted for marriage equality, and everything’s grand, that there are no homophobes in Ireland anymore. We drove them out like St Patrick with the snakes. Of course there are and there always will be and there will always be people who are just bad.

“We have made great progress but we can still make more. There’s always going to be bad apples; that is the way of the world. But there are more than you would think who would be quietly applauding what those a**holes did.”

Panti Bliss was speaking at Friday’s Lord Mayor awards in the Mansion House which honoured Dublin citizens who have enriched the city through their work and campaigning.

A posthumous award went to the the late Brendan Grace, whose family were present to accept it.

Mr Grace’s daughter Amanda Grace said while the event felt bittersweet, she was proud to represent her father and expressed thanks to the general public for their support since Mr Grace’s death in July.

“We’re very much not on our own with this, we have company. When you have company in grief it does hold you in a way that is comforting.”

Eileen Grace said she felt honoured to see her husband recognised but added that it still felt unreal that he was no longer around.

“He’s been on the TV the past three Mondays and then they were advertising it so much every single night. So for me it’s like as if he’s alive, he’s out there working and he’s just not coming home. So we haven’t had our reality really yet. We haven’t had a chance.”

Colin and Eithne Bell were awarded for their support of more than 800 families through the Kevin Bell Repatriation Trust which they set up following their son Kevin’s death in New York in 2013. Joe Hughes and Karen Phoenix were honoured for the Lil Red’s Legacy charity they established after their son Sean’s death last year.

The goal of the charity is to educate people about sepsis which killed their 15-year-old son, said Mr Hughes. The couple recently met with the HSE to arrange for the distribution of leaflets on sepsis across GP surgeries, pharmacies and in A&E departments and are also conducting information sessions at schools around the county.

“Sean is our leading light and everything we do is for him,” said Mr Hughes. “We’re just ordinary, working class parents, we don’t do these things. So it’s an honour to be here.”