Appropriate reparations required for ‘terrible aspects of our past,’ Minister says 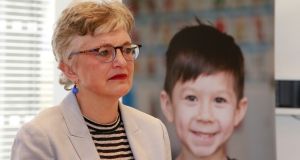 Minister for Children Katherine Zappone: “I think it’s really fantastic that women like herself have the courage to come into the public where the State must face them.” Photograph: Nick Bradshaw

The State must face up to how women like former garda Majella Moynihan were treated, and make reparations for the “terrible aspects of our past,” Minister for Children Katherine Zappone has said.

As a 22-year-old garda in the mid-1980s Ms Moynihan faced dismissal from the force, and a disciplinary process after having premarital sex with another garda, and giving birth to a child outside of marriage.

Under pressure from Garda officers she gave her son up in what she described as a “forced adoption,” and later attempted suicide five times.

Speaking on Wednesday, Ms Zappone said she was deeply moved by Ms Moynihan’s story, which was broadcast on Saturday in an RTÉ Documentary on One radio feature.

Ms Zappone said she was pleased “that the State is acknowledging the extraordinary pain, difficulties, abuse, however you want to describe it, that she had to go through.

“I think it’s really fantastic that women like herself have the courage to come into the public to share some of their story, to effectively be there, where the State must face them and respond appropriately,” the Minister said.

The issue touched on work in her own department, such as dealing with past legacies such as those of the Mother and Baby Homes, she said.

“There are lots more things that the State needs to do in my view, to face those terrible aspects of our past, to apologise or say we’re sorry, or ask for forgiveness, and to find ways to make appropriate reparation,” Ms Zappone said.

Fianna Fáil justice spokesman Jim O’Callaghan has called for Ms Moynihan, who left An Garda Síochána in the late 1990s after 15 years service, to receive a full, backdated garda pension.

Garda Commissioner Drew Harris is to meet Ms Moynihan to personally apologise over her past treatment in the force. In the Dáil on Tuesday, Taoiseach Leo Varadkar described the former garda’s treatment as “wrong on every level”.

Ms Zappone was speaking to media before an event announcing the expansion of post-adoption supports for children and families, run by children’s charity Barnardos.

The post-adoption service, previously only available in Dublin, Wicklow and Kildare is to be expanded nationally.

“I am thrilled to see more adopted children and teenagers in Ireland getting support through individual or group therapeutic work,” she said.

The Barnardos service has also been allocated extra funding to hire to psychotherapist to provide counselling to adults who were incorrectly registered in their adoptive parent’s names, often by religious institutions.