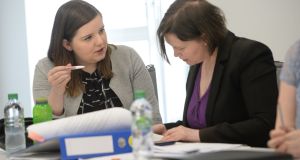 Michelle Byrne, vice president for campaigns in the Union of Students of Ireland (left) and Patricia Sheehy Skeffington BL, speakers at the Threshold seminar on the Residential Tenancies (Amendment) Act 2019, in Dublin on Tuesday. Photograph: Dara Mac Dónaill / The Irish Times

It is unlikely criminal sanctions will be pursued against rogue landlords, due to difficulties proving they “knowingly” broke regulations, the Residential Tenancies Board (RTB) senior legal officer has said.

The Government recently introduced stricter new laws governing the private rental market, which would see jail time or heavy fines for landlords found to have breached rules around rent caps and notices of termination.

However, Janette Fogarty, head of legal affairs at the RTB, which regulates the rental market, said the intention would be to pursue landlords in civil rather than criminal cases.

Under criminal offences, for which landlords can serve up to six months in prison if found guilty, there had to be proof they knowingly broke rental regulations, Ms Fogarty said.

“We’ve seen with the RTB, there’s [criminal] offences within the current 2004 legislation but it can be difficult to prove intent, but we think the civil route will be sufficient,” she said.

The regulator’s senior legal official was speaking at a conference on tenants’ rights organised by housing charity Threshold on Tuesday.

“The intention I suppose is you go down the civil route . . . However if it’s very clear and apparent that they’ve breached them knowingly, you have the option of going down the criminal route, so it will depend on a case by case basis,” Ms Fogarty said.

Offences landlords can be pursued for under the new legislation include failing to register tenancies, breaching the four per cent rent increase caps in designation pressure zones, and unlawfully serving tenants eviction notices.

Enhanced investigative powers given to the RTB were “quite strong,” and would hopefully lead to proactive compliance with rental market regulations, Ms Fogarty said.

“It will hopefully change the sector and focus minds, that you will not have to go down the criminal route,” she said.

“86 per cent of landlords own one to two properties, so you want to educate first, that we achieve compliance through education and awareness. Thereafter, if there is continuous breaches or serious breaches, then the sanctions and investigations route is there,” Ms Fogarty said.

Previously purpose built student housing was managed under licensing agreements rather than tenancy contracts. This meant regulations such as rent caps in pressure zones did not apply to student accommodation. However the forthcoming legislation would address that anomaly, Ms Byrne said.

One remaining problem was the starting price of new privately-developed student accommodation. Student housing complexes were coming onto the market at “astronomical” prices for rooms, such as €1,200 a month, she said.

In other arrangements such as “digs”, where homeowners let a room in their house to a student during the week, there were “no rights for students,” Ms Byrne said.

The USI and the Government have been promoting digs as a means to ease the scramble for accommodation among students each September. “The problem is they have no rights so we want to make sure students are looked after in these situations,” Ms Byrne said.