‘Phyllis was not only beautiful on the outside she was also a beautiful soul’, recalls brother 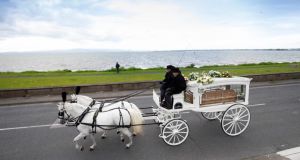 Philomena Lynott was “a force of nature”, mourners at her funeral in Dublin were told.

The voice of her son Phil, lead singer and bassist with Thin Lizzy, filled St Fintan’s Church in Sutton on Monday afternoon as friends and family gathered to remember Ms Lynott, who died at her home in Sutton on June 12th, aged 88.

“If you see my mother/Please give her all of my love/For she has a heart of gold there/As good as God above,” went the lyrics in the song Philomena, which Phil wrote for her before his death in 1986 at the age of 36.

Memories of her life and that of her son were everywhere through the funeral Mass.

There were the symbols brought up before it began; the book My Boy, written by Philomena; a mini-statue of the one of Phil on Harry Street in Dublin; a bottle of Jameson whiskey – “a bottle of holy water”, as celebrant Fr Bryan Shortall said she would have described it, and the gospels.

“For the last 33 years she made sure that his legacy as an artist, a musician, a poet was firmly passed on.”

The priest said he had known her for many years, latterly through his work as a chaplain to Beaumont hospital.

He said he was reminded of the U2 song Iris Hold me Close.

“Bono speaks eloquently about his own ma, who died before her time and he sings ‘I’ve got your life inside of me’, which is beautiful image,” he said.

A wreath from U2 lay on Ms Lynott’s coffin.

“Philip died before his mother and it was as if she guarded that light for him and passed it on,” Fr Shortall said. “When Philip died, Philomena was heartbroken. I see the image, a very Irish kind of devotion, but I see the image of Mary the mother of Jesus here, in a sense.”

The priest said he thought he heard a “rumble of thunder last Wednesday when she passed”.

Referencing the opening line of Thin Lizzy’s The Boys Are Back in Town, he said it was almost as if “Jesus went over to Phil and said ‘guess who just got back today’ ”. The congregation applauded as he sang the line.

Ms Lynott, the priest said, “was a force of nature.”

Her younger brother Peter Lynott said “Phyllis was not only beautiful on the outside she was also a beautiful soul.”

Audrey O’Neill, her friend of 20 years, remembered “an absolutely formidable woman” who was a very close friend and confidante. “I will miss her dearly. Thank you and I love you,” she said.

Fr Shortall was assisted at the Mass by Fr Liam Lacey of Sutton parish.

Chief mourners were Philomena Lynott’s sister Betty, brother Peter, his wife Elizabeth. Her sister Irene followed the Mass online from the US.

In the book, which Philomena Lynott contributed, she wrote to her son Phil: “It will not be long before I can see you, and give you a big kick in the bum for breaking my heart . . . I had thought that your death was a waste, and a destruction. I’m only beginning to learn that your life was a gift.”