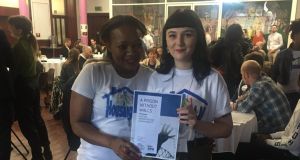 Sipho Sibanda and Aylisha Hogan pictured at the launch of A Prison Without Walls - Asylum, Migration and Human Rights report. Photograph: Amanda Ferguson

Human rights activists have called on Stormont departments to used devolved powers to “step up and make Northern Ireland a good place for asylum seekers to be” at the launch of a new report.

On Tuesday the Housing 4 All campaign group, led by asylum seekers and supported by the Participation and the Practice of Rights (PPR) charity, published its A Prison Without Walls report at the Indian Community Centre in north Belfast. This outlined issues around asylum, migration and human rights with a view to “ending the destitution of asylum seekers in Northern Ireland”.

At present there are about 1,000 asylum seekers in the North via one so-called dispersal area, Belfast. Most asylum applicants are not allowed to work while the UK Home Office consider their application.

If a person’s claims for asylum is refused then the accommodation and financial support — £37.75 per person per week on a debit card — provided by the British government is stopped after 21 days, except in very limited cases.

In the Republic the controversial direct provision accommodation system in place since 2000 is aimed at meeting basic food and shelter needs of around 5,000 people at dozens of centres, and includes a personal allowance of €38.80 per adult and €29.80 per child per week. It has been described as “inhuman and degrading treatment” and “institutionalised poverty” by legal and academic figures.

The new Housing 4 All report recommends Stormont’s Department of Communities and the Northern Ireland Housing Executive cease compliance with “disgraceful and inhuman enforced destitution policies of the UK Home Office”.

It also calls for an end to the “indefensible policy of refusing to grant permission to Housing Associations to use properties unavailable for the social housing waiting list to provide accommodation to destitute asylum seekers”.

It says there should be a zero tolerance approach to any “bullying and intimidation” of asylum seekers, and calls for work to take place with local health authorities to ensure mental and physical health is taken into consideration when allocating housing.

Sipho Sibanda, an asylum seeker from Zimbabwe, who has called Belfast home for four years, told The Irish Times the Housing Executive could “take away restrictions when it comes to homeless hostels so asylum seekers can access them”.

“The biggest issue that needs tackled is the right to work and mental health needs addressed too.”

Among the delegates at the report launch was SDLP MLA Claire Hanna. She said: “The report evidences the UK Government’s ‘hostile environment’ policy that is purposefully driving asylum seekers to destitution and hopelessness by providing minimal financial support and prohibiting paid work.

“The impact on mental health and on children make for particularly uncomfortable reading, though the report outlines fair, achievable actions for local government and public bodies to help improve the outlook for asylum seekers.”

People Before Profit councillor Fiona Ferguson said the report was “a powerful tool for action to tackle the destitution by design policies at Westminster”.

“I call on the British government to end this hostile environment system that treats people like animals, but ultimately I think it will take a big campaign to break that system.”

A UK Home Office spokesman said: “Asylum seekers who would otherwise be destitute are provided with free, fully furnished accommodation while applications are considered.”

If an asylum claim has failed, “we will continue to provide support, including accommodation, where a failed applicant is unable to leave the UK.”

On Wednesday President Michael D Higgins will host a garden party in Dublin to celebrate those who work to support refugees and people seeking asylum, fleeing persecution because of their race, religion, nationality, social group or political views, including delegates from Embrace Northern Ireland and cross-border bodies.