Dr William Morton, the Dean of Dublin's St Patrick's Cathedral, has appealed for donations to fund repairs to the cathedral's roof. To date over €5 million has been raised, but the overall cost will be around €9 million. Video: John Cassidy 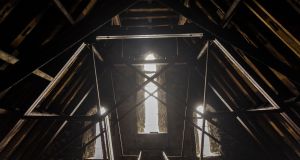 The state of disrepair to the cathedral roof. ‘Refurbishing it will require 12,777 new slates at an average cost of €250 each,’ says Dean Morton. Photograph: St Patrick’s Cathedral

You could drive a “Mini car” through holes in the roof of Dublin’s St Patrick’s Cathedral, Dean William Morton says, as it is in such “a perilous state”.

“About four years ago two large holes were blown in the roof when slates were removed in gale or hurricane conditions. It would have been possible to place a Mini car through either of them,” he says.

Luckily it happened over part of the building where there was a stone vault ceiling. “If it had happened where there is lathe and plaster ceiling we would have been in major trouble, because the whole lot would have caved in around us.”

A major €9 million roof-refurbishment programme is about to get under way. It should take 22 months to complete, but that “could be a little elongated”, advised the cathedral’s dean, only too aware that, even in a cathedral, the best laid plans can go astray.

Refurbishing the roof will require 12,777 new slates at an average cost of €250 each, in “six different sizes and three different widths”, he says.

It will be the largest such venture at St Patrick’s “since the Guinness restoration of the cathedral which happened between 1860 and 1865”. That was “a complete restoration” and funded by Benjamin Lee Guinness at a cost the equivalent of “€20/30/40 million” today – “an act of huge generosity”.

Then, the ceiling was lowered, meaning there is “quite a sizeable area between ceiling and roof timbers, which date from the 12th century”. Tested scientifically these were found to be “in very good condition” and are not being replaced.

It prompted unbidden thoughts of the four-letter word – fire. Notre Dame had “certainly sharpened the focus for us here”, the dean says. Dublin city fire services had been in “to get to know the layout, in case. God forbid.” It will mean another €1.4 million, for fire prevention purposes, he says.

St Patrick’s is almost as old as Notre Dame, being founded in 1191 to Notre Dame’s 1163. “To stroll through it is really to take a stroll through Irish history,” the dean says. “We have to try to restore and conserve it and provide something for this generation and future generations.”

To date, the cathedral has raised €5 million towards the roof refurbishment from tourism. One of the most visited places in Dublin, it had 600,030 visitors in 2018. Monies raised during Eucharist services and from candle stands, however, is ring-fenced for charitable purposes, “for people at the coalface, [amounting to] €1 million in the past 10 years,” he says.

There had been discussions with the Government about assistance towards the refurbishment. They were “very sympathetic” and €200,000 had been received from the Department of Heritage.

Fáilte Ireland contributed €125,000 towards the cathedral’s tourist experience and there was some discussion with Dublin City Council. Dean Morton also intends visiting the US next November to give talks about St Patrick’s.

People who wish to help can do so by donating amounts from €50 upwards at www.stpatrickscathedral.ie/support-us/

“Another way to support is to visit the building. It is the best way to learn in depth about the history of the place,” the dean says.