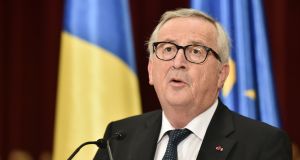 President of the European Commission Jean-Claude Junker: “Europe cannot and must not be a fortress with its back to the world.”

Growing inequality in Europe, fuelled by some governments’ failure to “deliver the benefits of economic growth to the people” must be tackled if the migrant crisis is to be addressed, the most senior EU expert on the issue has warned.

Stefano Manservisi, director general for international co-operation and development with the European Commission, said social mobility in parts of Europe Europe was “blocked” and there was a “mismatch” between an increasingly precarious workforce and the protections welfare states offered.

He said he hoped Europe would invest more in its “social pillar” in coming years as the union needed to convince citizens of the need to address global inequalities.

Mr Manservisi was speaking to The Irish Times on the fringes of the 13th annual European Development Days conference in Brussels.

Sometimes known as the “Davos” of development, the two-day event sees business, politics and development leaders from the northern and southern hemispheres discuss development issues.

Among the speakers on this year’s theme, Addressing Inequalities: Building a World which Leaves No One Behind, are commission president Jean-Paul Junker, Belgian queen Mathilde d’Udekem d’Acoz, president of Rwanda Paul Kagame and former British prime minister Tony Blair.

Organisations partnering with the event are the Department of Foreign Affairs, the Bill and Melinda Gates Foundation, Oxfam and the International Monetary Fund.

Minister for Foreign Affairs Simon Coveney had been due to attend but is instead in Belfast assisting with talks to restore the Northern Ireland Assembly.

Mr Manservisi said we were watching “the growth in the gap between rich and poor, the rich getting richer and the poorer staying poorer and a middle class at risk of poverty”.

While this was less pronounced in the EU, there were signs of it emerging.

Mr Junker said: “Europe cannot and must not be a fortress with its back to the world” adding, “Where there are inequalities they must be addressed.”

Outside the event, about 50 members of the Belgian Rwandan community protested against President Paul Kagame and Mr Blair whom they described as “war criminals”.

Kabere Fidele, who has lived in Belgium for 10 years, said Mr Kagame had “shut down political opposition” in Rwanda and that Mr Blair was an adviser to him. He said: “Paul Kagame is not a friend to democracy.”

Mr Kagame has been president of Rwanda since 2000. Some human rights groups have accused him of political repression.