Thinking Anew – For richer, for poorer 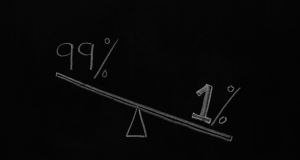 Charles the Great, better known as Charlemagne, became King of the Franks in the year AD 768. He united much of Europe during his reign and reached the height of his powers when he was crowned Holy Roman Emperor by Pope Leo III in Rome on Christmas Day 800.

He died in 814 and is buried in Aachen Cathedral.

There is a tradition that he left an instruction that when he died an open Bible was to be placed on his body with these words from tomorrow’s gospel reading highlighted: “For what shall it profit a man, if he shall gain the whole world, and lose his own soul?”

Last month the 48th World Economic Forum Annual Meeting took place in Davos, Switzerland, and its theme was “Creating a Shared Future in a Fractured World”.

Taking part were the rich and powerful of the political and business worlds. Its declared aim was to seek “a renewed commitment to international collaboration as a way of solving critical global challenges”.

A report entitled An Economy for the 1%, published by Oxfam for the forum, states that the wealth of the poorest half of the world’s population has fallen by 38 per cent in the last seven years, whereas the wealth of the richest 62 individuals has increased by more than half a trillion dollars.

Oxfam’s prediction, made ahead of last year’s Davos, that the 1 per cent would soon own more than the rest of us, came true in 2015 – a year earlier than expected.

Winnie Byanyima, Oxfam International Executive Director, said: “It is simply unacceptable that the poorest half of the world’s population owns no more than a few dozen super-rich people who could fit onto one bus . . . The richest can no longer pretend their wealth benefits everyone. The recent explosion in the wealth of the super-rich has come at the expense of the majority and particularly the poorest people.”

Knowing how to respond to such information is not easy. Envy achieves nothing; the rush to claim the high moral ground is weakened by the fact that most Irish people are among the richest 10 per cent of people on the planet.

Note that Jesus never said it was wrong to own things or enjoy them. He himself had wealthy friends and supporters and enjoyed their company.

What he did condemn was allowing material possessions to be the controlling principle of our lives, leaving us morally stunted and spiritually dead.

The First Epistle of John is clear: “If anyone has material possessions and sees a brother or sister in need but has no pity on them, how can the love of God be in that person?”

Possessions, therefore, are not the problem; what matters are the values that inform our use of them.

Tomorrow’s reading from Genesis reminds us of Abraham’s extraordinary “leap to faith” and, seemingly without apparent reason, saying yes to God.

For him this meant leaving behind his homeland and his possessions and setting out “not knowing where he was going” – depending entirely on God’s promise.

For most of us, however, faith journeys are more uncertain and involve a series of stops and starts, steps forward and steps backward.

We are in good company, as the Gospel reading shows.

Wonderful, flawed Peter’s exchange with Jesus reveals him to be just like us, trying to make God conform to what he wanted instead of him meeting God on God’s terms.

Peter would fail many times but once he submitted to God’s way, he discovered strengths within himself previously unrecognised.

And that is important because this surrendering of self – self-denial – is often portrayed in negative terms whereas it can be a process of self-discovery whereby a person having become less self-centred and more alive to the needs of others discovers personal gifts of generosity and compassion previously unrecognised.

John Bunyan understood that when he wrote: “A man there was, though some did count him mad; the more he cast away, the more he had.”

Woman threw TV off balcony injuring person walking below, court told 13:26
‘No evidence’ acting on expert report in 2016 would have helped Debenhams staff 13:22
McEntee agrees to take Dáil questions on Woulfe appointment 13:21
December sky: Jupiter and Saturn to appear closest to each other since 400 years ago 12:54
Settlement of €9.4m for girl (12) with paraplegia 12:42