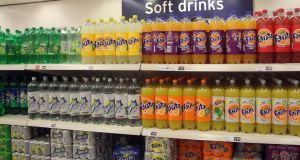 Young people from more affluent families were less likely to drink sugared soft drinks every day than those with lower affluence, but this was not consistent across all countries and regions. Photograph: Lewis Whyld/PA Wire

Singling out the soft drinks industry for the new sugar tax is “unjustified”, an industry group has said, citing a large drop in the number of teenagers consuming such products daily.

The Irish Beverage Council (IBC), a division of business group Ibec, noted a recent World Health Organisation (WHO) report that showed an almost 68 per cent reduction in the number of 11-15 year-olds drinking sugar-sweetened drinks from 2002 to 2014.

The new tax is due to come into effect in April 2018 with the Government likely to outline the details in the October budget.

The overall percentage of teens consuming these products every day was 37 per cent in 2002 but had fallen to 11.1 per cent three years ago, according to the WHO report.

In its May report on adolescent obesity and related behaviours, the world body said daily consumption of sugary soft drinks and sweets decreased noticeably, but that consumption remained high.

“Almost one in five (19 per cent) adolescents drinks sugary soft drinks daily and one in four eats sweets every day,” it noted.

Overall, daily soft drinks consumption reported by adolescents across 32 European countries and regions decreased from 29 per cent to 18 per cent during the period.

Young people from more affluent families were less likely to drink sugared soft drinks every day than those with lower affluence, but this was not consistent across all countries and regions.

A decline was observed in almost all countries and regions and among boys and girls, but no significant change in consumption over time was seen for either gender in France and Luxembourg, for girls in Belgium (French), Malta and Poland, and for boys in Hungary and Lithuania.

Those with the greatest overall decreases (greater than 20 percentage points) were Ireland, Israel, Slovenia, England and Scotland.

WHO also reported that in 2014, only 38 per cent of teenagers aged 11, 14 and 15 years from 40 countries and regions in Europe consumed fruit daily, while 3 per cent claimed to never eat fruit.

“Having poor eating habits is an important contributor to overweight and obesity among children and adolescents. Young people across Europe consume high levels of fast food and sugar-sweetened beverages and spend less time eating family meals than was the case for previous generations,” the WHO report said.

Director of IBC Colm Jordan said: “We are seeing the impact of industry innovation with an increase of new ‘no sugar’ and ‘low sugar’ products on the market and growth in volume sales for this sub-category in recent years.

“While obesity rates continue to increase, daily consumption of sugar-sweetened soft drinks amongst 11, 13 and 15 year olds is falling dramatically.”

He noted the WHO report also found an increase in computer use and television viewing as well as a reduction in moderate to vigorous physical exercise.

“The results prove that a holistic approach is needed to tackle childhood obesity. The singling out of the soft drinks industry by way of the proposed sugar-sweetened drink tax is unjustified,” Mr Jordan said.

He said that in four countries where sugar-sweetened drink taxes were introduced (Mexico, France, Denmark, Hungary), obesity had actually increased.

He said the Irish soft drinks industry was playing its part by reducing sugar content through “industry reformulation”.

“We are continuing to work with Government to deliver effective, evidence-based solutions to yield real public health benefits.”