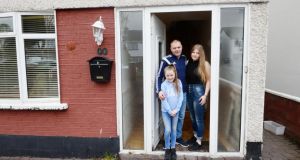 Daniel O’Connor with his daughters, Stacy and Sophie, at their home in Tallaght after finally getting their mortgage-to-rent approval after 100 hours of negotiations. Photograph: Alan Betson 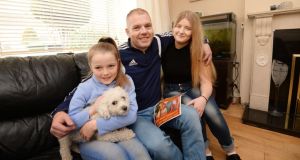 Daniel O’Connor with his daughters, Stacy and Sophie, at their home in Tallaght. Photograph: Alan Betson

Danny O’Connor (42), a single father of three, was described as a “perfect candidate” for the mortgage-to-rent (MTR) scheme when he applied in 2015.

Despite his “ticking every box” for the scheme, it took almost two years for his case to successfully conclude, making his case perhaps the perfect illustration of problems in the scheme.

Some of these have been addressed under reforms introduced by former minister for housing Simon Coveney and in force since March 27th, but issues remain.

David Hall of the Irish Mortgage Holders Organisation, advocate for Danny since June 2015, said at the time he “ticked every box” for the scheme.

Having given up his job as a taxi-driver after the death of his wife, Ashling (32), in 2008, he was eligible for social housing. The house is in an area with strong housing demand so re-letting would be straightforward should the family ever leave.

Under MTR, the lender must put the distressed borrower forward to the Housing Agency for the scheme. If approved, the borrower surrenders the home to the lender, which sells it on to an approved housing body (AHB) which lets it back to the householder as a social housing tenant.

Among the obstacles in Danny’s case was that his lender, like many, wouldn’t engage with MTR. Also, because Danny had an ongoing case with Ashling’s life insurance provider and could receive a large pay-out, his local authority was reluctant to deem him eligible for social housing.

Sinn Féin Dublin MEP, Lynn Boylan, referred him to Mr Hall while advocating for him with the local authority along with then councillor and now TD, Eoin Ó Broin. Mr Hall “put in over 100 hours on the case”.

In the end, the lender agreed to Danny selling the house directly to Clúid – keeping it out of the strict MTR criteria, while the council agreed, just in time, to accept his eligibility for social housing.

He got the good news on April 4th, when the family were at St Kevin’s Church in Kilnamanagh, Tallaght, for Scott’s (12) confirmation. Danny was due in Dublin Circuit Court two days later, where a repossession order would almost certainly have been granted.

“My phone rang,” Danny said. “I saw it was my solicitor. I didn’t know what was happening. I went out to listen to the message. The solicitor – she was telling me I had to get into her that day to sign the papers for the mortgage to rent. The deal had gone through.

“The kids, they could see by my face. ‘The deal’s getting done,’ I told them. ‘We’re safe.’ I was crying in the church. Scott was crying, saying it was the best day of his life.”

The past two years have been “unbelievably stressful and scary”. He and his children – Stacey (10), Scott (12) and Sophie (17) – became tenants of the Clúid housing body on April 5th, the day before they faced homelessness.

“Danny’s was a classic case that should have gone through in weeks, not years,” Mr Hall said. “The solution was always going to be the same from day one, but it was a case of bringing the parties along, stopping and starting. It was endless. Danny and his family should not have had go through that stress.”

Mr Ó Broin said the case showed there was “not enough flexibility” in the scheme. “It took a lot of effort on everyone’s part to make it work. We were lucky that the local authority showed flexibility, the lender saw a way to agree without breaking its own rules – but it shouldn’t be left to luck.”

Under reforms the value threshold of dwellings has increased, and a dedicated MTR liaison officer has been appointed in each local authority, which should speed the process at local level.

However, lenders still have a veto over the scheme as they must agree to putting a borrower forward for it. This has to change, according to David Hall.

“It should be mandatory that no repossession can be sought until MTR has been explored,” he said.

Simon Brooke, head of policy with Clúid, said the AHB was “absolutely delighted Mr O’Connor and his family are now free from debt and are able to continue to live in their house . . . This was not technically a mortgage-to-rent case because there were special circumstances but the effect was the same.”

Danny is looking forward to getting back time he feels he lost, due to anxiety and depression, with his children.

“I want to make it up to them. They have been so good. They don’t ask for much. Sophie, she said to me last night: ‘Fair play to you, dad. You fought and you never gave up’.”