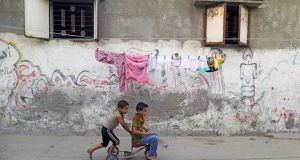 Governments have been urged to allow the voices of children forced to leave their home countries and seek asylum abroad to play “a central role in informing policies” that affect refugees’ lives.

Charities in Ireland and abroad marked World Refugee Day on Tuesday by calling on governments to make a greater effort to speed up refugee resettlement programmes and provide more legal options for family reunification across the EU.

Dr Muireann Ní Raghallaigh from UCD called on governments and policymakers to pay more attention to the voices and experiences of refugee children. She said they should have “a central and active role in informing policies that directly affect their lives, rights and wellbeing”.

Chief executive of the Irish Refugee Council Nick Henderson welcomed the Government’s decision to voluntarily opt into the EU’s relocation scheme and commended the Defence Forces for their role in saving lives in the Mediterranean.

However, he warned the State had a “mixed” record in providing for children seeking protection and said direct provision centres were “entirely unsuitable” homes for young people.

“Refugee children and young people are often portrayed as vulnerable, but their experiences and identities are rooted in resilience, strength and courage,” he said.

Fiona Finn from Nasc, the Irish Immigrant Support Network, said world refugee week should highlight the anguish suffered by millions of families separated by conflict. She called on the Government to reassess the International Protection Act 2015 which reduced the possibility of family reunification for many.

A total of 1,238 refugees have arrived in Ireland since the Irish Refugee Protection Programme was announced in September 2015. The Government has committed to welcoming a total of 4,000 refugees into the country by the end of this year.

A record 65.6 million people were forcibly displaced from their homes in 2016, driven in large part by conflict in Syria, Iraq and Yemen as well as in sub-Saharan Africa nations including Burundi, the Central African Republic, the Democratic Republic of Congo, South Sudan and Sudan.

More than half of refugees last year were made up of children under 18 years, while 20 people were displaced every minute, according to the UN Refugee Agency’s Global Trends report.

Speaking on Tuesday, UN High Commissioner for Refugees Filippo Grandi warned that turning our backs on people displaced by war, persecution and violence would only lead to “barriers, alienation and despair”.

“Today we live in a world which uncertainty often abounds; economic instability, political upheaval and violence close to home can make us want to shut our eyes or close our doors. But fear and exclusion will not lead us to a better place.”

“Through UNHCR’s work we witness the courage, tenacity and brilliance of refugees every single day. Having lost their homes, their work, and sometimes their families – they don’t give up – they find a way to start again. Striving to belong, and to contribute, they reach out to their new neighbours, building connections, and creating new opportunities. Given the right environment, our experience is that refugees bring solutions, not problems.”

Mr Filippo commended the nations who had offered refugees a safe place by welcoming them into their societies and said World Refugee Day marked the importance of countering the voices that seek to exclude and marginalise refugees.