Rape victims should be allowed give evidence by video-link, say barristers 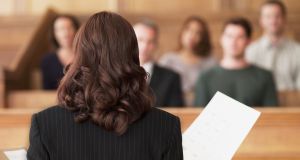 A review group was appointed last September to examine how sexual offences are dealt with by gardaí and the courts. Photograph: iStock

Rape victims should be allowed give evidence by video-link, consideration should be given to allow them pre-record their evidence, and “rape myths” can influence juries and must be combated, the body representing barristers says.

In its submission to the statutory review of how sexual offences are investigated and prosecuted, the Bar Council also says “appropriate” notice should be given by lawyers intent on cross-examining alleged victims on their past sexual history.

Expressing broad agreement with the Rape Crisis Network of Ireland, which in February said victims of sexual violence were “vulnerable witnesses”, the council says, however, “any proposal to pilot pre-record cross-examination” will need “careful consideration”.

The submission will be presented on Monday to Tom O’Malley, BL, chair of the review group appointed last September by Minister for Justice, Charlie Flanagan, to examine how sexual offences are dealt with by gardaí and the courts.

This review follows a similar process in Northern Ireland led by Sir John Gillen, which itself was carried out on foot of the controversial nine-week rape trial in Belfast which ended with the acquittal of two high-profile rugby players. The Gillen review, which has 253 recommendations, was published in May.

While there is no empirical research here on whether juries are affected by rape myths, “the council recognises that research from other jurisdictions indicates rape myths do have an impact on jury verdicts” and judicial direction to juries on these may be necessary.

Among the myths, says the council, are that the victim is at fault if he or she dressed “provocatively”; that if they did not scream, fight or get injured it was not rape; or, if people had sex before the assault they had forfeited a right to refuse.

To speed up rape cases’ progress to trial – which can take anything up to three or four years from when the offence was initially reported to gardaí – the council calls for a complete overhaul of the “disclosure process”. This is where defence and prosecution disclose to each other the evidence on which they will be relying. This can be protracted and sometimes is not complete even by the first day of a trial, sometimes leading to further delays during the trial.

Another issue that can slow a rape trial is when defence counsel indicates an intention to cross-examine the alleged victim on their past sexual history. In such cases the complainant is entitled to legal representation, and so a trial may be delayed while representation is arranged.

“The council recommends that a person who wishes to cross-examine on previous sexual history should have to lodge a notice at an appropriate juncture before the trial.”

Supporting “the concept of pre-trial hearings” to deal with legal applications before the “trial proper” gets under way the council says this could not happen until the disclosure process is overhauled and more judges are appointed.

Pre-recording cross-examination of witnesses seems attractive, to reduce the stress and trauma on vulnerable witnesses, but there are concerns. Among these are that video testimony “lacks the immediacy and persuasiveness of live testimony”, and, if new information emerges after the recording the witness might have to be recalled.

The O’Malley review is scrutinising issues including access to specialist training for gardaí, the judiciary and legal professionals; supports for witnesses; reasons for delays in bringing cases to court; whether there should be pre-trial hearings to determine evidential issues, and, whether there should be restrictions on media and public access to rape and sexual offences trials.