Scouts pitch their tents for weekend despite Tusla concern 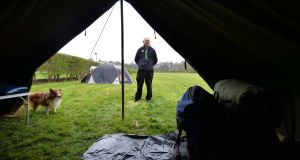 John Butler, manager of the Portlick Scout Campsite near Athlone, preparing for more than 400 campers over the weekend. Photograph: Alan Betson / The Irish Times

On Friday night, the first of more than 400 scouts were starting to pitch their tents for a large camping weekend in Portlick, outside of Athlone, Co Westmeath, the sounds of stake-hammers filling the night-time air.

The camping trip comes amid the latest controversy facing Scouting Ireland, whose ability to safely run overnight trips was questioned this week by Tusla, the State child and family agency.

The weekend trip is a dry-run for teams preparing for the world Jamboree camp in West Virginia in the United States in July, including older scouts and 15 to 17-year old venturers.

The controversy, accusations and complaints about safeguarding standards within Scouting Ireland were playing out in the public, but were far removed from “what’s happening on the ground”, said John Butler.

The 64-year-old is the Portlick campsite manager, which stretches over nine acres, and includes a climbing wall, zip wire, archery, and kayaking facilities.

If this camp didn’t go ahead this weekend, these people would be marching to the Dáil

On Wednesday, Minister for Children Katherine Zappone told the Dáil that Tusla had “serious concerns” with current child protection practices in the youth organisation.

Despite the controversy, there was no question of the large camping trip being cancelled, Mr Butler said. “If this camp didn’t go ahead this weekend, these people would be marching to the Dáil,” he said.

Parents put their children into the organisation so that their child gets “a sense of outdoor fun, and give them a sense of leadership and development”, Mr Butler said.

“To have been assaulted by the Minister coming into the Dáil and saying what she did, that hurt a lot of leaders across the country, saying the organisation was not safe,” he said.

Putting children first was now the central “ethos” of scouting, he said, adding “that might not have been the case in the past, where children weren’t listened to”.

The organisation has been facing a major historic child sex abuse scandal, and an internal review has identified more than 300 alleged abuse victims, and 237 alleged perpetrators.

Tusla, Scouting Ireland and An Garda Síochána have been working closely to manage the fallout of those revelations, and respond to victims coming forward.

Tusla and Scouting Ireland held a meeting on January 8th, in Larch Hill, south Co Dublin, where it was agreed the agency would review Scouting Ireland’s current policies and compliance with child protection legislation.

Speaking to The Irish Times, a spokeswoman for Tusla said this meeting was “part of our usual business process” of engaging with youth organisations over child protection standards.

Tusla officials carried out a desk-top review of the organisation’s policies over the course of a month, including an examination of how several recent child protection cases had been handled.

Despite the fact that the children’s welfare organisation had not carried out an under-the-bonnet examination in individual troops, Tusla officials were concerned enough to raise serious concerns about current practices.

Scouting Ireland is set to meet Tusla officials in the coming days, to seek to address the agency’s concerns

There were “live cases” where poor practice in Scouting Ireland had “left children exposed to risk of harm”, including situations where children had been allegedly subjected to sexual assaults and indecent exposure by other children, while in tents on camping trips.

Tusla’s concerns were set out in a letter sent to Scouting Ireland chief executive Dr John Lawlor on February 18th. It recommended that the organisation undertake an “immediate review” of how children were supervised, and that Scouting Ireland “consider the viability of continuing with overnight trips”.

Scouting Ireland is set to meet Tusla officials in the coming days, to seek to address the agency’s concerns. Ms Zappone has said Scouting Ireland must implement a list of eight “urgent” recommendations for change, set out in Tusla’s letter.

The youth organisation has defended its current standards, stating child protection practices and statutory reporting policies are robust. Scouting Ireland’s interim safeguarding manager Ian Elliott said he was unaware of any practices “to justify the levels of concern from Tusla”.

Privately, sources within Scouting Ireland said the concerns and language of the letter caught them “totally unawares”, and speculated the move had “political” motivations.

Senior sources in Tusla, and others close to the Minister, have expressed concern at Scouting Ireland’s defensive approach taken to concerns raised. If the organisation fails to take action on Tusla’s eight recommendations for improvement, suspension of its State funding of nearly €1.1 million would likely again be on the table, sources indicated.

Among the organisation’s grassroots, reaction to the current controversy has been one of shock and, in some corners, anger at Ms Zappone and Tusla.

Colin Corcoran (63), a volunteer with the Donnybrook scout troop, south Dublin, said the recent controversy “breaks your heart”. Involved in the movement since 1969, he said the recent revelations, following the past abuse scandal, were incredibly disappointing.

“I think there’s no point in having scouting if you can’t go camping or hiking,” he said. On Scouting Ireland’s future, he said there was still a lot of goodwill across the country towards the organisation. “I think we will survive,” he said.

Mr Harvey, who led the former Scout Association of Ireland from 1996 to 2002, said Ms Zappone had no business reading out the contents of Tusla’s February 18th letter on the floor of the Dáil.

“I haven’t spent 50 years in an organisation for this, to have it thrown under a bus,” he said, adding the Minister’s actions were “absolutely appalling”.

“To be contemplating ending scout camping was totally abhorrent,” Mr Harvey said. The organisation had ongoing child protection issues, but standards were being “constantly updated and worked on”, he said.