‘All optics, no substance’: Survivors react to Vatican abuse summit 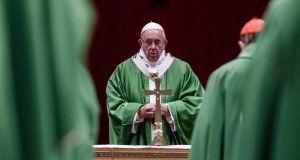 Clerical child sexual abuse survivors in Ireland and abroad have reacted with disappointment to the four-day meeting at the Vatican on the protection of minors, which ended on Sunday.

In his final strongly worded address to 190 Catholic Church leaders from around the world, Pope Francis called for the eradication of child abuse “from the face of the earth” and how in “the justified rage of the people, the church sees the reflection of God’s wrath, betrayed and slapped by these dishonest consecrated persons”.

It was later announced that the Vatican is to prepare a guidebook for Catholic bishops worldwide so they “clearly understand their duties and tasks” in dealing with clerical child sexual abuse cases.

Pope Francis is also to create task forces “of competent persons” to help bishops’ conferences and dioceses “that find it difficult to confront the problems and produce initiatives for the protection of minors”. He will also issue an edict on the protection of minors and vulnerable persons which will apply to the Roman Curia and Vatican State.

“A handbook for bishops on child abuse in 2019? It should have been written 20 years ago,” said Dublin abuse survivor Andrew Madden, who in 1995 was the first person in Ireland to go public about his abuse by a priest.

Mr Madden, however, insisted he was not disappointed at the outcome of the Vatican meeting: “I had no expectations. Go way back to the apostolic visitations [to Ireland following the 2009 Ryan and Murphy reports], Pope Benedict’s letter [to the faithful in Ireland] of 2010, all that circus, all those things which were going to come about and, then, nothing.”.

The Vatican meeting was “all optics with no substance. Besides I don’t agree the Vatican should be setting standards for all jurisdictions on child safeguarding.” That, said Mr Madden, was a matter for legal systems, and where countries fell behind, “they should learn from other countries”.

The Vatican should just be required to be complete transparent, Mr Madden said.“It should hand over what it knows to civil authorities. Now it just refuses to participate in State inquiries,” as it did in Ireland where the Murphy Commission was concerned when it was investigating the Dublin archdiocese and Cloyne diocese. Instead, Mr Madden added, the Vatican offered “ill informed-waffle”.

Abuse survivor Marie Collins served on the Vatican’s Commission for the Protection of Minors over a three-year year period until March 2017 when she resigned in frustration at how its work, she believed, was being impeded by officials at the Congregation for the Doctrine of the Faith.

'The guidebook and task force for bishops promised were all advisory. What if a bishop decides not to follow these?'

She was heartened that “a lot of admissions were made by Cardinals of destroying documents and covering up” at the four-day meeting.

“For me it was also frustrating to hear those things now as I, and others, were called ‘enemies’ and ‘liars’ for saying such things,” Ms Collins added.

Impressed by the strength of Pope Francis’s language on Sunday, she said “we were told what would follow would be a roadmap for the future. We still haven’t seen that. We have been waiting decades for it, and it’s still not there.”

There had been “nothing about bishops’ accountability, nothing about zero tolerance where any priest who abused a child is concerned. A lot of good words from the Pope but still nothing,” she said.

The guidebook and task force for bishops promised were “all advisory. What if a bishop decides not to follow these?” Ms Collins said.

She said she also found it disturbing that Fr Hans Zollner, an organiser of the meeting on the protection of minors, was unable to confirm whether the abusers of those survivors who addressed the 190 bishops and religious leaders at the Vatican over recent days were still in ministry.

“Apart from the ethics of it all I find it beyond belief that they could put forward eight survivors and not know who the perpetrators are,” she said.

“If the victims put before the bishops to show them the horrors of abuse and no effort was made to ensure the perpetrators in the cases had been dealt with, it then is the height on hypocrisy … They must have verified that they were genuine survivors, and to know this the perpetrator would need to be named. This is apart from the fact that if victims were used who have not come to the point of being able to disclose their perpetrator, it would surely be unethical to use them.”

In Rome Anne Barrett Doyle, co-director of BishopAccountability.org which has long campaigned on the issue of clerical child sexual abuse, described the outcome of the four-day Vatican meeting as “a stunning letdown, a catastrophic misreading of the grief and outrage of the faithful”.

“We needed new canon laws, stipulating ‘one strike and you’re out’ for abusive clergy and their complicit managers. We needed the Pope to release the names and files of abusive clergy.We got instead a handbook, some task forces and a canonical tweak,” Ms Barrett Doyle said.

It was, she said, a weirdly negligible outcome, especially in light of the expansive conversation of the past four days. The summit brought forth big ideas and remarkable commentary. Cardinals talked about file destruction, cover-up, and investigating brother bishops.

In terms of the needed internal reforms in the Church, it was “a failure,” Ms Barrett Doyle said.

However in “a larger sense, it achieved a great deal. In a way perhaps not intended by its organizers, it surely increased global awareness of clergy sex abuse.”

This was “public consciousness-raising on a massive scale,” Ms Barrett Doyle added.

Hope for change, she said, “shifts back to the secular sphere. Alarmed by the summit’s failure to produce reform, survivors, activists and civil authorities will be galvanized. It’s clearer today than it was a week ago that accountability of the Pope and bishops will come only from outside the church.”