Syrian Kurdish family appeals for daughter to be accepted into Ireland 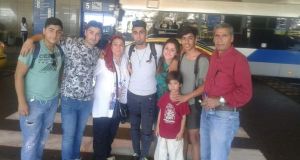 The Sido family when they were briefly reunited in Greece for a few weeks last summer. Nermin, who has been refused under family reunification, stands between brothers Jwan and Khalil.

The family of two young Syrian Kurdish men, who came to Ireland as refugees last year, have appealed for the Government to allow their sister (22) into the country after she was refused entry under family reunification.

Jwan and Khalil Sido applied for their parents and siblings to follow them from Greece after they arrived in Ireland as part of the Government’s relocation programme in March 2018. The boys’ parents and two young brothers, both of whom are under 18, were accepted under the programme but their sister Nermin was refused.

The family fled their home in the district of Afrin near Aleppo in northern Syria after the war broke out and spent six years in Turkey before moving to Greece. The two brothers, who travelled ahead of their parents and siblings to Greece, spent their first few months in Ireland at the Abbeyfield Hotel in Ballaghaderreen and now live in Navan, Co Meath.

“My older brother is already in Germany – we don’t want to be separated anymore,” said Jwan (18). “It would be bad to leave our sister in Greece. When I left my family in 2015, the first few months I was always crying. I don’t want her to go through that. It’s very bad for my parents too.”

Speaking on the phone from Greece, Nermin says she has never been apart from her parents. She trained as a hairdresser in Turkey and is learning English in Greece. However, she is petrified at the prospect of being left alone in the country.

Her father, Ahmad, says it is “unimaginable” that he and his wife could be separated from their only daughter and already struggle being so far from their sons in Ireland and Germany. “Jwan was very young when he left us and went to Greece,” said Ahmad. “We come from a very family-oriented culture, we’re very close. I cannot conceive of leaving my daughter alone – she has always been with us. The only thing I want is for my family to be together.”

Under the provisions of the International Protection Act 2015 reunification is limited to spouses, children under 18 and parents, if the applicant is aged under 18. Up until 2016, refugees in Ireland were entitled to apply for family reunification with grandparents, parents, siblings, children, wards or guardians under the Refugee Act 1996.

The brothers also tried applying for their sister to come to Ireland under the Humanitarian Admission Programme 2 (IHAP) which has made two callouts for applicants and allows Irish citizens of foreign birth, programme refugees and those with international protection to apply for immediate family members to join them in Ireland. Nermin was ineligible for the programme as she is no longer living in Syria or a neighbouring country.

Appeals have been made by a number of TDs for the Minister for Justice to exercise ministerial discretion to ensure Nermin is not left behind in Greece. The department responded to an appeal made by Fianna Fáil justice spokesperson Jim O’Callaghan saying discretion would be used on the vulnerability of certain IHAP applicants if all 530 proposed programme spaces are not filled. However, it added that it expected all places would be filled and that, even if the case was reconsidered, it “may not result in any such application being approved”.

Responding to an appeal made by Independents4Change TD Clare Daly, Minister for Justice Charlie Flanagan said “unique and very particular family circumstances” would be examined separately on a case-by-case basis and that he had requested his officials examine the Sido family’s situation within that context.

Asked to comment on the family’s situation, a spokesman for the department said the Irish Naturalisation and Immigration Service had provided “for some additional scope to address particular issues of vulnerability” when allocating the remaining IHAP places. In examining this vulnerability, issues such as health, mental health and completing family units “will be triaged beyond satisfying the definition of ‘neighbouring country’,” he said.

Fiona Finn from Nasc, the Irish Immigrant Support Centre, said the Sido family’s situation further underlined the importance of the International Protection (Family Reunification) (Amendment) Bill 2017, which was recently examined by the Oireachtas Justice Committee and proposes to extend family reunification to include siblings, grandchildren, wards and guardians.