Rural action plan: Derelict shops may be converted into homes

Carl O’Brien meets six DCU students from various parts of rural Ireland and asks them what would it take to get them to move home after college. Video: Bryan O'Brien 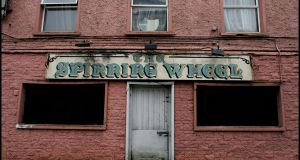 Initiative would allow for the refurbishment of vacant commercial properties, such as shops and premises above ground floor retail units, without having to apply for planning permission. Photograph: David Sleator

Derelict shops and other commercial units could be converted into homes and apartments without needing planning permission under proposals in the Government’s plan to revitalise rural Ireland.

The so-called “Action Plan for Rural Ireland”, supported by a €60 million investment and which will be set out today in Ballymahon, Co Longford, by Taoiseach Enda Kenny, will contain measures aimed at rejuvenating rural areas of the State, including towns, villages and regional cities.

One of its aims is to “make rural Ireland a better place in which to live and work by revitalising our town and village centres”. The plan is targetting the creation of 135,000 jobs in rural areas, according to Minister of State with responsibility for the Office of Public Works Sean Canney.

One such initiative is a review of planning law to allow for the refurbishment of vacant commercial properties, such as shops and premises that could be above ground floor retail units, without having to apply for planning permission.

It is understood the move will not just be confined to rural areas, because such a change would have to apply nationwide.

There will also be proposals to reduce one-off housing by increasing the number of “small housing schemes in towns and villages”.

The plan will be announced by Mr Kenny, Minister for Arts, Heritage and Rural Development Heather Humphreys and Minister for Communications Denis Naughten.

The move to allow the commercial units be changed into residential properties will require changes to planning and development regulations and a spokeswoman for Ms Humphreys said it was Government’s intention to “progress” this in the coming months.

“This action will be overseen by the Department of Housing, Planning, Community and Local Government as part of the suite of measures which will be progressed to attract people back into main streets and town centres,” the spokeswoman said.

“This action is essentially all about helping to facilitate shops and other commercial premises which have become vacant in recent years due to the economic downturn to be reused as houses, and thereby help to breathe life back into our towns and villages.”

The Department of Housing will also be responsible for encouraging the development of small housing schemes in rural towns and villages.

The exact details of how this will be done have not been finalised, but the department will work with county councils to “identify potential projects and initiatives to encourage opportunities for new private sector housing provision within smaller towns and villages , tilising vacant/infill and backlands-type sites”.

It also aims to improve employment opportunities for young people in rural areas, with an emphasis on increasing apprenticeships and trainee schemes.

The Government has already set a target of having 50,000 people in apprenticeships by 2020 and wants over 100 apprenticeship schemes in place.

The rural plan also wants Solas, the national training agency, to work with Education Training Boards to increase the number of options for those leaving secondary school.