As many as 5,000 take to the streets to protest against new US president

Thousands turned out for the Women's March on Washington in Dublin. The inauguration of Donald Trump as Commander-in-Chief of the United States sparked similar marches across the world. Video: Enda O'Dowd 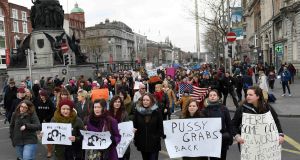 A view of the crowd, estimated at 5,000, at the Women’s March in Dublin. Photograph: Clodagh Kilcoyne 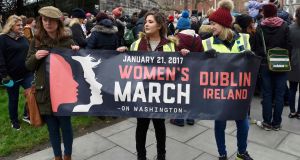 Protesters gathered at the Garden of Remembrance to take part in the Women’s March in Dublin. Photograph: Clodagh Kilcoyne 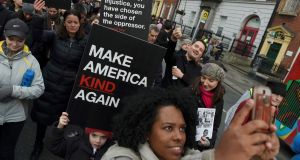 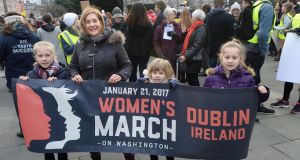 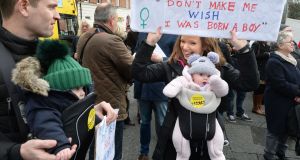 Sarah Jane O’ Regan from Ashbourne, with her twins Louisa and Conor, and friend Joey Watson, taking part in the Women’s March in Dublin on Saturday. Photograph: Dara Mac Dónaill 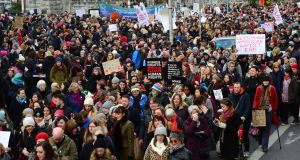 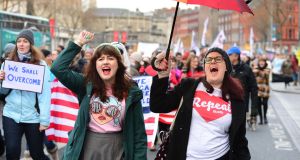 The gathering under granite grey skies at the end of the Dublin leg of the Women’s March on Washington had to be moved from the GPO on O’Connell Street to a more spacious area near the Dublin Writers Museum because it drew a larger crowd than either the organisers or the authorities had anticipated.

Shortly before midday, and less than 24 hours after Donald Trump’s inauguration ushered in a new world order – thousands of women, men and children came to the Garden of Remembrance to voice their concern at the new US president’s world view, his political perspective and his attitude to women.

By the time the march set off on its short loop around the north-inner city, 5,000 people had assembled, and while there was an array of brightly coloured and witty signs, the mood was decidedly downbeat and sombre.

“I’m from Washington state,” said Heather Blair as she walked under the shadow of Big Jim Larkin’s statue to a soundtrack of “Anti-woman, anti-gay. Donald Trump go away” chants.

“I am living in Berlin right now and just visiting Dublin, but I felt I had to be here because we are heading down a very dark and scary path, not only with the election of Donald Trump. There is also Brexit and the popularity of Marine Le Pen in France. There are a lot of things going on in the world that are anything but stellar and we need to take a stand.”

Lily Ramirez-Foran, who is originally from Mexico but has been living in Dublin for 17 years, was at the march to take a stand. She had brought a small effigy of the new US president – one with an angry face and teeny tiny hands – with her.

“In a developing country like Mexico you are not encouraged to go out protesting much, but I felt I had to be here today,” she said. “ Mexico is on its knees and this guy is going to make it so much worse with the racism and the economic policies.

“We are fighting a war on drugs and now we are going to have to fight a war with our neighbours as well over economic policies. It is crazy stuff really, so I felt I had to come out and talk about building bridges not walls,” she said making reference to the placard she was carrying.

Meghan Scully was another American who felt compelled to take to the streets of Dublin in protest at what is happening in her country. “I am from Chicago and I am really pissed,” she said – clarifying that it was not in the Irish sense of the word.

“I can’t march at home, but I wanted to do something today. And I feel better because I am surrounded by people who are as opposed to Donald Trump as I am. To be honest, I am still in shock at what has happened. Initially, he was just a joke, but now the whole thing is very real.”

While it was billed as a women’s march, men made up about 30 per cent of the crowd. They included Brian Bailey, from New York state, who was marching in a white T-shirt with the single word “Feminist” emblazoned on the front.

He expressed the hope that Trump’s time in office would “lead to the rebirth of a progressive movement led by the likes of Bernie Sanders and Elizabeth Warren, and I am hopeful it will energise a lot of people”.

It was a hope shared by Labour Seanad leader Ivana Bacik. “I watched his inauguration speech with despair,” she said. “This march can at least give us a sense that we are doing something in the face of very dangerous political change. And I hope it gives a boost to the Democratic Party in the United States. I hope they will be boosted when they see that there are people all over the world who are standing with them.”

She expressed concern about President Trump’s attitude to minorities, people with disabilities and climate change. “I would also have great concern about his support and praise for Vladamir Putin despite the fact that he is so deeply anti-democratic,” she added. “Trump’s supporters don’t seem to care about that because they look at Putin and they see a strong leader and that is very worrying.”

As he marched, en route to the podium where he delivered a short speech in which he told marchers they were both “right and righteous”, Colm O’Gorman, the head of Amnesty International Ireland, said, “the marches which are taking place all over the world today matter”.

He said it was “easy to be cynical and to say a march like this cannot affect change, but it can. And it can challenge the hateful rhetoric of Donald Trump and his supporters. It is a rhetoric which has left people scared, but we are still determined and the bottom line is that it is only when people stand up to hatred and to intimidation that things will change”.