In an upcoming episode of Eamonn Mallie meets... Martin McGuinness talks about his personal and political life. Video: Irish TV 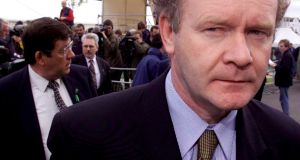 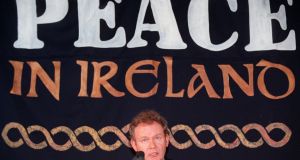 Sinn Féin’s Martin McGuinness speaks at a press conference in London in February, 1998, during which he spoke about Sinn Fein’s exculsion from the Northern Ireland peace talks. Photograph: Dave Thomson/AP

Martin McGuinness and I are the same age - 66. He chose the path of militant republicanism and joined the IRA whilst I opted to remain at school and took the university route, ending up eventually in journalism.

I have been one of the privileged and at times voyeuristic witnesses to a society gorging itself in competing violence and stillborn political initiatives for several decades.

It often occurred to me that had I had different parents or had I found myself in different circumstances or had I been of a different disposition - I have an obsessive personality - I might have been South Armagh’s equivalent to IRA leader Martin McGuinness of the Bogside or to late UDA leader John McMichael, whom I knew and who was killed by the IRA.

Very early on in my chosen career, I realised there was no room for judgementalism. In my heart, I hated all manifestations of violence but my personal stance on violence did not burgle me of my curiosity as to the motivations of those taking up arms in pursuit of political goals.

It was such curiosity which decided for me in 1979 - shortly after the IRA killed Earl Mountbatten and his family at Mullaghmore, Co Sligo and 18 soldiers near Warrenpoint on the same day - to go into the Maze prison to meet prisoners to try to understand what was prompting the Loyalist wrecking of cells and the IRA prisoners’ ‘blanket’ protests.

I recall vividly the former deputy first minister’s mother Peggy sharing her sense of shame and embarrassment with me as she revisited the day her local priest arrived on the family doorstep at Elmwood Street to tell her Martin had been caught, having stolen acid from St Columb’s College in Derry to make acid bombs.

Obviously this was not what Martin McGuinness’s parents expected from one of their offspring. Peggy also told me her son was not “much good at football”. When I reminded him of this years later, he was not impressed and challenged the very notion.

In fact, McGuinness is a cricket fanatic, as is his Assembly colleague Raymond McCartney. It’s a Derry thing.

In 1975, when former SDLP leader John Hume walked into the Stormont Castle room of Lord Chief Justice Robert Lowry - the then chairman of the Constitutional Convention, which was an unsuccessful attempt to replace Sunningdale - the judge ordered his tipstaff to “turn off the cricket”, adding “I am sure John wouldn’t be interested in that”.

“Why do you say that?” asked Hume, before saying he “was a very good left arm spin bowler” for the City of Derry Cricket Club. “Remember one thing - we were always very good at playing you boys at your own game,” he said.

The McGuinness family was not a known republican family nor a political family in any sense. McGuinness told me in an interview with Irish TV last year that both his parents were daily communicants and as a large family of seven - six boys and one girl - they were brought up in a two-bedroom house with no toilet and only a scullery, not even a kitchen.

The family knelt down nightly and said the rosary. Religion was their politics, unlike many West Belfast inheritor families of the 1916 flame.

In fact, an old Derry republican, Sean Keenan, who was interned in the 1940s, once told me that when he “got out of jail and came back into our street, no-one knew I had been in jail”. 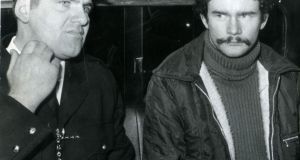 Such was Martin McGuinness’s lack of political awareness as a teenager, if not ignorance, he joined the Official IRA initially. He didn’t know the ‘old’ IRA was going through a period of mutation devoting more time to debate on left-wing political intellectualism.

McGuinness’s switch to the Provisional IRA happened almost immediately and he very quickly achieved high rank, admitting to the Saville Inquiry to having been ‘second in command’ in the IRA in Derry at the time of Bloody Sunday in 1972.

His pre-eminence as a senior influential republican led me to his door 22 years later, on August 19th, 1994. By then, he - along with Gerry Adams - had been a prime mover in every sphere of republicanism for several decades.

They continued to tax the best brains of Harvard, Oxford, Cambridge, TCD, UCD and other colleges, despite the fact that Adams had started out in life as a barman and McGuinness as a trainee butcher.

The air was thick with speculation that an IRA ceasefire was on the cards. I wanted to hear what James Martin Pacelli McGuinness had to say about all the ceasefire talk. (He explained he was christened Pacelli after Pope Pius X11.)

The former IRA leader was extremely welcoming and recited some poems for me which he had written, one of which was about a seagull which had ‘bombed’ his car from the air. Our encounter that day was casual, relaxed and unhurried.

It would be wrong to say our exchanges were confessional but we both knew with whom we were speaking and trust was obtained. We were the same age and our legs hung out of the same nest culturally and religiously. Neither of us were born into republican dynasties.

How do you think I feel?

I took away a number of messages that day after several hours of fascinating conversation. I outlined to my host that as a Catholic, not perfect, and as a human being I could not square the taking of life. To my surprise, the 50-year-old McGuinness replied: “How do you think I feel?”

I knew in my heart McGuinness was not likely to share with me the biggest secret in republicanism - a date for an IRA ceasefire.

As I rose to my feet to bid farewell, I asked would it be wise for me to be out of town in the coming weeks.

McGuinness looked directly at me and said: “I wouldn’t be out of town.”

I left the McGuinness household that evening on a happier note but with no detail or certainty as to when the fevered speculation would actually dawn.

In a remarkable coincidence, I was visiting the Wellington Park Hotel in South Belfast later that night when I spotted John Hume sitting all alone on a soft bench opposite the reception area of the hotel.

He raised his head and looked crestfallen when I addressed him.

Hume was going through a torrid time over his talks with Adams on many fronts.

To my surprise, this man to whom my generation of young Catholics looked for guidance and inspiration, not to speak of hope, asked me: “What do you think Eamonn?”

I was now on the back foot, mindful of my professional responsibility and ethics - you don’t ever trade information.

Hume asked: “Do you think so?”

I later learned the SDLP leader had been mauled at a high powered SDLP meeting that evening at party headquarters. One senior SDLP member spoke of him “destroying the party because of his talks with Gerry Adams”.

Hume lifted his head and declared: “You say I am killing the party. People are being killed every day out on that street. If I am wrong I will apologise, but I will not apologise for trying to stop the violence.”

Twelve days later, on August 31st, the IRA declared a ceasefire. I was told some time later a very senior figure in the SDLP cried that night - many fearing it was the end of the party.

Sadly, as I pull the curtain down on this moment in history the two architects of the road map to peace, John Hume and Martin McGuinness, sons of Derry, the town they loved so well. are both ill - conceivably because of the toll the Troubles have taken on their respective lives.

Both will go down in history for bringing an end to the IRA’s campaign of violence - a campaign which left hundreds and hundreds of fellow Irish people and their English neighbours dead.