Family forced to split due to overcrowded accommodation

‘The children are really suffering. They are saying they don’t want to go to school’ 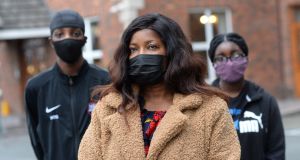 Izzy Okojie with two of her children, Martins and Gift, is hoping the apparent confusion over their housing will be clarified. Photograph: Dara Mac Dónaill / The Irish Times

A Dublin family has been forced to split up because their local authority will not allow them live in overcrowded accommodation and is treating them as separate households.

Izzy Okojie, a nurse, and her children Collins (19), Martins (15), Queen (14) and Gift (13) have been designated homeless and are in emergency accommodation in Inchicore, while her husband Amujede Okojie, a security worker, remains in a one-bedroom council flat in their home town of Balbriggan.

The family had been sharing the apartment since April, when Ms Okojie and the children returned from England. Last month however, Fingal County Council said they couldn’t stay and directed them to a city-centre hotel.

The couple came to Ireland seeking asylum in 2004 with one child and were granted leave to remain in 2005. In 2010, then with four children, they were housed in a three-bed home in Balbriggan, under the Rental Accommodation Scheme.

In 2014, unable to find work, they decided to relocate to England. However, as Mr Okojie was on a HSE surgery waiting list they planned he would follow them to England when he had recovered. He was moved by the council into his current apartment in 2015. His surgery, to remove a double-hernia, was finally performed in 2017 and his recovery was protracted.

Ms Okojie “struggled” in Nottingham, working on zero-hour contracts and last year when their landlord sold their rented home they became homeless. “Always the children were asking to come back to their father. Then with the Covid they were scared. I decided in April to come back.”

The family returned by ferry in early April. The couple contacted the council to explain the changed family circumstances. “They said, because of the lockdown, we should all stay in the apartment. We slept on the floor, on couches,” says Ms Okojie.

In July they presented for an “assessment” with the council. “They were asking, ‘Why did you leave England?’ and saying, ‘You shouldn’t have come back. You have made yourself homeless’.

“After some weeks I got an email saying I needed to bring proof I wasn’t on a housing list in the UK and my bank statements, which I did.”

In August, she says, a housing officer advised them to submit two forms – one to ask permission to reside in her husband’s council dwelling, and an application for a transfer to a larger dwelling.

On October 1st, however, a council official called to tell her she and the children must leave. “They said we had no option but to go to a B&B in Gardiner Street.” She waited until her children finished school that Thursday, at Bremore Educate Together secondary school, before travelling to the city centre. “It was one room, with bunk beds. The children started crying. I tried to be strong,” she says.

On October 22nd they were moved to a hotel in Inchicore, which is “better”, with wifi and cooking facilities. However the 38km journey to school, entailing a Luas, train and 25-minute walk, takes two hours every morning and evening.

If Mr Okojie joined his family he would be seen to have made himself homeless.

On November 6th, Ms Okojie was asked by the council to apply for housing for her and her children only. “It is so confusing,” she says. “We have always been a family. The children are really suffering. They are saying they don’t want to go to school, it is too far. I am having a lot of sleepless nights.”

Following intervention by Garrett Mullan, a Social Democrats representative in the area, a meeting between the couple and a council housing officer is due to take place on Thursday.

Ms Okojie is “hoping” apparent confusion over the family’s housing needs will be clarified. She would be “grateful” for emergency accommodation nearer Balbriggan. She would like to start working again in nursing, but says: “I can’t while we are living so far from the schools. I have to put the children first. They have been through so much.”

“Cases like this underscore the acute shortage of social housing and the significant emotional burden this creates for families and individuals affected. We really hope this case will be resolved for the family affected soon.”

A Fingal spokesman said council officials were “in dialogue to assist the family” adding: “It is critical that families who present with housing support needs do so with as much notice as possible, and all relevant information.