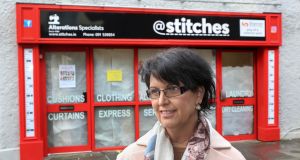 Chris Roche at her shop Stitches on Eyre Street, Galway. She believes a post-Christmas rise in Covid-19 is not inevitable. Photograph: Joe O’Shaughnessy

Rosscahill native and businesswoman, Chris Roche, like many other parents, is desperately hoping that her son, now studying in Scotland, can make the journey home for Christmas to the Connemara village.

“Although I am a business owner, I am also a mother. Ultimately, family comes first,” Roche said.

A post-Christmas rise in Covid-19 is not inevitable, says the owner of Stitches, a clothing and alterations shop on Eyre Street in Galway.

“Businesses would be severely impacted by any further lockdowns . . . I feel cases rising again can be avoided if everyone, including those who may travel home for Christmas, practise the HSE guidelines and do their utmost to keep themselves and those around them safe.”

Her son Konor (22) has been studying to become a paramedic in Glasgow for the past two years. He is hoping to return to Rosscahill for the Christmas period. His mother is not the only one who wants him home.

“If Konor could not come home for Christmas I would be devastated. In a few years, my siblings and I will have our own families and be doing our own thing on Christmas Day, so these are the last years we will have as siblings all together,” says his sister, Danielle.

“It’s been exceedingly difficult not being able to see him this year. Our family all thought we would be able to get cheap flights and fly across the pond on the weekends. We weren’t expecting to say goodbye and not see him for so long,” she added.

Asked if she is worried about backlash from the community worried about locals returning from overseas, she says: “There are people who don’t agree with family returning for Christmas. I think that is out of anxiety and fear of the virus, not out of badness.”

Not every Rosscahill emigrant is coming home, though. Emily Halpin, who now lives in Australia, will spend the first Christmas in six apart from her family. In past years, either she, or they have travelled to be together.

“It’s just not the same without family,” says Halpin. “Even my nan visited me at one stage. It has been a strange year not having seen anyone. Home feels further away than it ever has.”

When she finally does next get to Ireland, Halpin expects to still have to live by Covid-19 restrictions of some kind by isolating for some days.

“As much as it would pain me being so close to my family and not being able to see them until after . . . isolation, it’s a small price to pay for their wellbeing,” she added.

Local GP Dr Seán Grimes, reluctantly, believes people should not return home from abroad this Christmas, even though he knows many of his elderly patients have not seen loved ones for nine months.

“Unfortunately, this virus has no borders. I would advise as we approach Christmas, we continue to heed the advice of Nphet and public health,” he says. “People should not travel from abroad unless there are exceptional circumstances.”

Instead, he hopes, fervently, that people living within the State will be able to travel: “It is particularly important, not alone given the time of year but also from a mental health perspective that they have some interaction with family members.”

Fianna Fáil Galway West TD Éamon Ó Cuív agrees with the Roche family that the most important thing is to reunite families this Christmas, but it is too soon to say if that can happen yet.

“It’s too soon to call it. I think the Taoiseach has done a great job. Realistically we all want families to be together for Christmas. It all depends on whether numbers of people infected continue to decline.”

Local people have played a “spectacular” role in recent weeks to help cut case numbers, but those numbers show how personal action can drive numbers up, or down: “We see how quickly it can change in terms of numbers. The next few weeks are crucial.”

Encouraged by the falling figures, Sinn Féin Galway West TD Mairéad Farrell hopes for Christmas travel compassion from Nphet: “We all want to get home at Christmas to see our families.”

Rosscahill native Michelle Walsh worries about how the return of emigrants would affect elderly and other people at high risk, many of whom are “quite anxious”.

“My biggest fear about people returning home from abroad would be that they would go overboard with gatherings.”