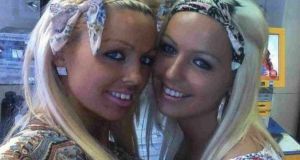 The funeral takes place in Bray today of Amanda Gilbert (29), twin sister of Tara Gilbert (27), who died along with nine others in a fire at a halting site in Carrickmines, Co Dublin, three years ago.

Ms Gilbert, a mother of two, is understood to have taken her own life in the early hours of Friday morning.

Her sister Tara died in October 2015 while staying with friends at the halting site.

Tara was pregnant and engaged to Willy Lynch (25), who also died in the fire, along with Tara’s daughter Jodie (9) and the couple’s daughter Kelsey (4).

Amanda and Tara were the only children of Harry Gilbert, who survives them. Amanda is also survived by her partner Ryan Odlum and children Savanah and Callum. The funeral will take place at 11am at St Peter’s church, Little Bray, Co Wicklow, followed by interment in Springfield Cemetery.