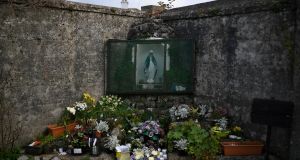 A shrine dedicated to children lost at the site of the Tuam babies graveyard. Photograph: Clodagh Kilcoyne/Reuters/File

Campaigners for the reburial of remains of babies at the former Tuam mother and baby home say Vatican backing for their plight should heap pressure on the Government to act.

Historian Catherine Corless, who gathered death certificates for 796 infants linked to the home in Co Galway, has been told by the Papal Nuncio to Ireland that he shares Archbishop of Tuam Michael Neary’s view that there should be a “dignified re-interment” of the remains in consecrated ground.

“It is uplifting really to know that the Vatican is behind us,” she told The Irish Times.

“This is going on six or seven years now and it is a long time to be dragging it out.

“I would hope this might put a bit of pressure on the government to wake up and let them know we haven’t faded away, we are still here and we need the final report and the exhumation of the remains.”

The release of the final report from the Commission of Investigation into Mother and Baby Homes was delayed again in June for another four months, with the Government blaming the coronavirus for the latest setback.

The commission was established to inquire into the treatment of, and dealings with, women and children in 14 mother and baby homes as well as four county homes between 1922 and 1998.

It was set up following claims that up to 800 babies may have been interred in an unmarked mass grave in the Bon Secours mother and baby home in Tuam.

Excavations of the site in 2017 showed “significant quantities of human remains” in a 20-chamber underground structure near a decommissioned sewage tank. DNA analysis confirmed the ages of the dead children ranged from 35 weeks gestation to three years and were buried chiefly in the 1950s.

The Tuam home, which was run by the Sisters of Bon Secours order of Catholic nuns, closed in 1961.

Archbishop Neary has said it was a “priority” for him to re-inter the babies’ bodies in consecrated ground, or if government refuses to authorise the exhumations, that he would bless the ground where they were originally buried.

In a letter to Ms Corless, dated July 15th, Archbishop Okolo said he shared Archbishop Neary’s views and that it was his conviction that everyone could work together to “rectify the mistakes of the past”.

Ms Corless said the reply “means a lot to us and to each and every survivor”.

Ongoing delays by the Government were “heartbreaking” for survivors, many of whom “are afraid they won’t last, they won’t live that long to see justice done”, she added.

“It is really degrading for all survivors. They are being treated like they always were, as if they’re not important, they are second class citizens. I hope this might make the Government aware that we are very much here and we haven’t gone away.

“It is heartbreaking to think that it doesn’t seem to matter, that hundreds of babies were disposed of in this manner. It is beyond my understanding how anyone can leave them there. It is a disgrace that this hasn’t been sorted long ago.”

Ms Corless said it “is a boost, now the Vatican is behind us.”

Ms Corless said the suggestion by Archbishop Neary that the Tuam site could be blessed if the Government objected to the exhumation of bodies was unacceptable.

“You can’t bless a septic tank and leave the remains there. That is out of the question,” she said.