‘Everyone keeps asking why I’m staying but I don’t want to strike out Ireland,’ says jailed student 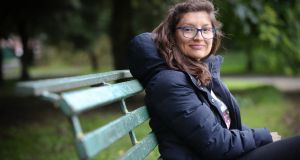 “Can you explain to mum that I’m okay. Tell her, I don’t know, that they’ve put me in some sort of medical centre until the next flight leaves for Copenhagen so she doesn’t get too worried. I love you a lot, kisses, ciao, I have to go.”

Estafany Alquinta González’s WhatsApp voice message to her sister, sent in the afternoon of Thursday, July 2nd, lasts 45 seconds. Speaking in her native Spanish, her voice shakes as she frantically explains she has been refused entry into Ireland and is being deported back to Denmark.

“I’ve been told I’ll have to spend two days in a police station until my flight leaves”, she says. “After that I don’t know what I’ll do because I don’t have a visa, maybe I’ll go back to Chile. ” Her voice quivers and she lets out a quick sigh before asking that her sister keep the truth from their mother.

After recording the message González handed her phone to an immigration official. She would not see it again for 12 days.

On Tuesday, González was released from Mountjoy prison’s female Dóchas centre after spending nearly two weeks in solitary confinement. The 33-year-old environmental engineer had arrived in Dublin earlier this month for a six-month English language course.

A seasoned traveller, González previously lived in New Zealand and spent the last two years working in Denmark and Germany. A few months before the Covid-19 pandemic hit Europe, she decided to enrol on a six-month English language course in Dublin to improve her fluency.

“I’m an engineer and I wanted to start finding work in that area but didn’t have the English needed to do a PhD or communicate professionally about my work.”

She was conscious that her Danish visa – due to expire in May but extended until July because of the pandemic – was running out. The pandemic had hit home in a personal way when, in early May, her 64-year-old father contracted the virus and died. “He was a very independent person like me. We always spoke through WhatsApp and I knew he was there for me whenever I needed him. But then suddenly, he was no longer there.”

In early June, González contacted the Department of Foreign Affairs (DFA) using their webchat service asking whether it was possible to travel to Ireland for her English course. She was told she would need to quarantine for two weeks but as long as she had all the necessary documentation she wouldn’t have any problems.

Chileans do not need a visa to enter Ireland and are entitled to a three month tourist stamp. González planned to contact the immigration services after completing her quarantine to arrange her residence permission to study.

She arrived into Dublin shortly after 4.30pm on Thursday, July 2nd. At immigration control, she handed over a series of documents, including proof of payment for her English course and information on the accommodation where she planned to self-isolate.

When told she was not permitted to enter as a foreign student during the pandemic, González handed over a print-out of her DFA web chat conversation. The official again refused entry and said she would be deported back to Denmark on the next available flight. It later emerged she was denied entry on the grounds that she represented a real and immediate threat to the fundamental policy interests of the State.

Her phone was taken and she was brought to a small room where she spent a number of hours. She was told she would spend two nights in a Garda station as there was no flight until Saturday. She was briefly allowed to use her phone to send a message to her sister before being led to a Garda car and driven to the Dóchas centre.

On leaving her small backpack at the entrance, she changed into prison clothing and was brought to a small cell. “When I saw the words prison outside I was so scared. The only thing in my mind was what I’d seen about jails on TV. I imagined a horrible place.”

That night, she asked the prison guards to leave the light on in her cell. “I needed that light. It was so hard to sleep. It’s still hard to sleep even now that I’m out.”

González did not see any other inmates during the following week. Guards were friendly and gave her books and puzzles to keep her busy. She was tested for coronavirus and it came back negative.

She lay awake each night thinking about her father. “I had no way of distracting myself at night. I started asking my dad to help me get out. In Chile we believe that when a person dies they stay with us forever. So I knew he was there beside me.

After nine days González received a call from solicitor Wendy Lyon. Her sister and friends had spent the previous week trying to find a lawyer in Dublin. González says she was never given the opportunity to contact a solicitor before Lyon’s call.

On Monday, July 13th, Lyon presented the case to the courts and González was called to appear in person the following day. She attended on Tuesday and was freed after the State did not contest the High Court-ordered inquiry into the legality of her detention.

She was brought to collect her belongings from the prison and the airport, including her phone which “had about 800 messages”, before checking into a hotel for the night. She has been granted her three month tourist stamp and plans to apply for permission to remain and study.

“Everyone keeps asking why am I staying here but I don’t want to just strike out Ireland after everything that’s happened. I want to put that in a bubble and judge Ireland on everything that happens from now on. I came with a plan to study English and I’m not going to give up on that dream when I did nothing wrong.”

On Friday, the Chilean engineer packed her belongings and took a bus to Galway. The night before leaving the capital, she struck up a conversation with her taxi driver. Upon hearing where she was from, he asked whether she was the woman he’d heard about on the radio. “He told me he was sorry for what his country had done. That made me feel good. It felt like it came from the heart.”

1 Swedish expert backtracks on herd immunity for Ireland
2 Rising Covid-19 infections among older people ‘a grave concern’, NPHET warns
3 Miriam Lord: Micheál has Mary Lou pegged as a street angel and House devil
4 Sweden and coronavirus: how has the outlier of Europe fared?
5 Cult leader who claims to be reincarnation of Jesus is arrested in Russia
Real news has value SUBSCRIBE