Tributes paid to Bishop Christopher Jones on his death aged 82

‘He was one of nature’s gentlemen, most faithful friend, a lovely gentle pastor’ 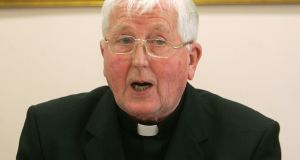 The late Bishop Christopher Jones was a former president, of Accord, the Catholic marriage care service. Photograph: Alan Betson

Tributes have been paid to Catholic Bishop Emeritus of the Diocese of Elphin Christopher Jones who died on Friday aged 82.

He was remembered as a man dedicated to person-centred social services and to his work with the Travelling community.

A native of Rathcroghan, County Roscommon, he was educated at St Patrick’s College, Maynooth and ordained a priest on June 21st 1962.

Catholic Primate of All Ireland Archbishop Eamon Martin described him as a much loved bishop.

“Fifty-six years of priesthood, and twenty-four years as a bishop sums up a life of commitment, fidelity, service and love for the people, religious and priests of his home Diocese of Elphin.”

Bishop of Elphin Kevin Doran thanked those who cared for Bishop Jones during his illness.

“The death of Bishop Christy is like the loss of a grandparent. Up to the time of his retirement in July 2014, he worked tirelessly in the service of God and of the people of God, in this diocese and further afield.

“He will be remembered by many for the way in which he put flesh on the Gospel through his care for and friendship with those who were poor and most at risk in our society.”

Former president Mary McAleese also paid tribute. “We have been friends for life and he was one of nature’s gentlemen, most faithful friend, a lovely gentle pastor,” she told The Irish Times.

“He was just a lovely human being. He had a tough death. The sad thing for me is to know that in the short few years that he had after retirement he just faced tragedy after tragedy. Four of his sisters - he was the second youngest of a family of 11- four sistersdied one after the other, two within a few days of each other.”

Ms McAleese noted one of his sisters joined the Medical Missionaries of Mary. Two others became nuns and a brother became a priest.

“Families like them we’re never going to see again I don’t think - 11 of them, five of them gave their lives in the service of the church,” she said.

In 1971 he spent over a year as archivist at Saint Mary’s, Sligo, while also serving as chaplain of Saint Columba’s Hospital, Sligo. He returned to Summerhill College as spiritual director from 1973-1979.