‘It is important that global issues feature in the election debate’, says agency 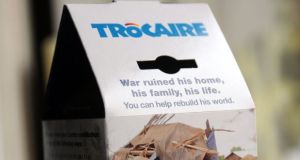 Trócaire has outlined five priority areas for the next Government including championing the Paris Agreement on climate change. Photograph: Kim Haughton

Trócaire, the Catholic bishops overseas development agency, has called on all political parties to put climate action and human rights at the heart of the next Programme for Government. It has encouraged voters to ask candidates to take a strong stand for global and climate justice.

Chief executive Caoimhe de Barra said “we are calling for parties to commit to concrete action on issues around climate justice and human rights. Trócaire is helping millions of people around the world pick up the pieces from the climate disaster that is taking place in front of our eyes.

“The next Government will sit during a crucial time period when international efforts to reduce this crisis simply have to ramp-up.”

Ireland had “a proud record of being strong on human rights, dating back to our joining of the United Nations 65 years ago memorably expressed through our opposition to the apartheid regime,” she said.

“There are clear legislative areas the next Government can move on to support human rights. The Occupied Territories Bill, which would ban trade with illegally occupied areas, has passed both Seanad and Dáil votes. This legislation needs to be passed in 2020,” she said.

It outlines five priority areas for the next Government. These include championing the Paris Agreement on climate change “by enshrining a target of net zero emissions into the Climate Action Act and joining the group of EU member states calling for an increase in the EU’s 2030 climate targets.”

It calls on the next government to “commit Ireland to supporting the UN legally binding Treaty on business and human rights to regulate the activities to transnational corporations, and also introduce mandatory human rights due diligence legislation in Ireland.It also wants “the Occupied Territories Bill to ban trade in goods and services between Ireland and illegally occupied territories, including Israel’s illegal settlements in the West Bank,” to be enacted.

Ireland should “take a leadership role on hunger and food insecurity by supporting healthier and more sustainable food systems that deliver on the UN ambition of zero hunger by 2030” and “ensure the internationally agreed target of spending 0.7 per cent of GNI on overseas development assistance is reached by 2025 – that is less than 1c in every €100 to be spent helping people worst affected by poverty and injustice to build a better and safer life,” it said.

Ms de Barra highlighted the importance of ensuring Ireland is firmly committed to promoting global justice. “Elections are fought primarily on the basis of domestic policy, but Ireland also has a vital role to play on the global stage and it is important that global issues feature in the election debate,” she said.

“Ireland may be a small country but we consistently punch above our weight internationally. Not only do we have an important voice within the EU, there is a strong possibility of Ireland being elected onto the UN Security Council later this year. Global issues will have to be high on the agenda for whoever forms the next Government,” she said.

Ireland “can also join the coalition of states pushing for a binding UN Treaty on business and human rights. This Treaty would protect indigenous communities from the growing threat of land grab from big businesses.

“In the communities where we work in places like Honduras and Guatemala, indigenous people are being murdered, attacked and imprisoned for trying to defend their land. Ireland can play a leading role in defending these communities,” she said.