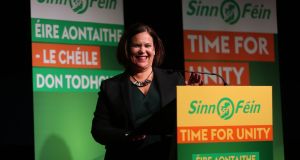 Sinn Féin leader Mary Lou McDonald has described her Fianna Fáil counterpart Micheál Martin as “cantankerous” and said she suspects there are divisions within his party over his approach to entering government.

Speaking on the campaign trail in Tralee, Co Kerry on Friday, Ms McDonald claimed Mr Martin might soon be saying he will not go into government with his own party having already ruled out doing so with Sinn Féin and Fine Gael.

She said she had never seen such “a cantankerous approach” at a time when people desperately needed leadership and solutions.

Ms McDonald, who was canvassing with Kerry candidate Pa Daly, said no sensible person would think it appropriate for someone who wanted to be taoiseach to spend his time running down and criticising another party and excluding the people who support Sinn Féin.

Announcing her party’s policy on the cancer-screening programme CervicalCheck, Ms McDonald said smear tests should never have been sent abroad for analysis and that Sinn Féin in government would bring this responsibility back to Ireland over time.

“It is vitally important that we have our own national screening laboratory service for CervicalCheck,” she said. “We will allocate €16 million to this, placing a focus on recruitment and training of specialist staff and equipping labs to the highest possible standard.”

Ms McDonald said there had been “a huge human cost to the CervicalCheck scandal” and that “we owe it to the women affected” to change the system for the better.

“The priority must be to ensure that women have the highest level of confidence in the screening process and we can achieve this through common-sense reforms.”

Ms McDonald paid tribute to outgoing Kerry TD Martin Ferris, who is not seeking reelection, and his daughter, former councillor Toireasa Ferris. Ms Ferris ruled herself out of running to hold her father’s Dáil seat last summer and later announced she was giving up her seat on Kerry County Council.

Local Sinn Féin activists say they are growing in confidence that Mr Daly will be able to retain the party’s seat in Kerry, which Fianna Fáil is hoping to gain having added Tralee councillor Norma Foley to its ticket.

Mr Daly is well known locally due to his work as a solicitor and the fact Labour is not running a candidate in Kerry, a constituency where it held two seats a decade ago, is regarded as favourable to his cause.