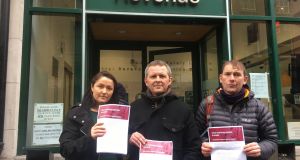 Solidarity-People Before Profit has called for a general strike to “bring the country to a standstill” until increases to the pension age are reversed.

The State pension age was increased to 66 in 2014, and a further planned increase to 67 next year has become a major issue of the general election campaign.

Speaking on Friday, Solidarity-PBP TD Richard Boyd Barrett said the party was calling for the increase to be scrapped and the pension age returned to 65.

The changes were brought in by the Fine Gael-Labour coalition government and meant, in some cases, when people were forced to retire at 65 they had to claim Jobseekers Allowance until they were eligible for the State pension. Under the legislation the pension age will increase again up to 68 on January 1st, 2028.

Mr Boyd Barrett said his party had opposed the changes at the time and had consistently called for them to be reversed.

“We have every reason when they’re talking about increasing the pension age to 68 to get people out on the streets, the same way we did with the water charges”, he said.

Mr Boyd Barrett, who is seeking to retain his Dáil seat in the Dún Laoghaire constituency, said Solidarity-PBP were calling for a general strike on the issue.

“We would like to see people bring this country to a standstill in order to prevent further increases in the pension age and to bring it back to where it should be at 65,” he said.

Dublin Mid West TD Gino Kenny said a mass strike was “the only way you will put manners on this Government,” and was critical over the lack of industrial action from trade unions on the pension issue.

“We have to ask why did the unions let it go this far in the first place, and we in the progressive left have been flagging this issue about the pension age for a long, long time,” he said.

The party were launching its election policy on the cost of living, outside the central Revenue office on Cathedral Street, Dublin city centre.

The policy called for the minimum wage to be increased to the living wage of €12.30 per hour; for Universal Social Charge to be abolished for those earning less than €90,000 a year, and for workers to get four extra public holidays a year.

Other policies included abolishing the Local Property Tax in favour of a wealth tax, and the introduction of a State owned not-for-profit insurance company to offer cheap premiums.

Sandra Fay, who is standing in Dublin South-West, said Minister for Children Katherine Zappone had “absolutely” failed to tackle the high cost of childcare.