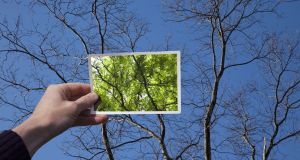 “My life-experience and my DNA makeup usually make me suspicious of ‘spectacular conversions’. Nevertheless, conversion is an intrinsic aspect of the Christian story.” Photograph: Getty Images

Last week a young man was sentenced to 20 years in prison. As the judge announced the sentence, the convicted man turned to his family and said: “Five World Cups and I’ll be out.” When I read that I immediately “fast-forwarded” 20 years to wonder about the 40-something year-old man who will emerge from prison.

While our prisons are places of punishment, they must also afford people the possibility of rehabilitation.

Do we improve or disimprove with age? Probably an impossible question to answer. My life-experience and my DNA makeup usually make me suspicious of “spectacular conversions”. Nevertheless, conversion is an intrinsic aspect of the Christian story.

In tomorrow’s Gospel, St Mark (9:2 -10) tells the story of the transfiguration. In the presence of his closest companions, Peter, James and John, Jesus is transfigured beyond recognition. And these men are so confused by it all that they have no idea what to do. Peter blurts out some nonsense about building three tents. But the fact of the matter is that: “He did not know what to say; they were so frightened.” Later, as they came down from the mountain, Jesus warns them not to speak about this “until after the Son of Man had risen from the dead”. That even caused more confusion as they discussed among themselves what rising from the dead might mean.

In my job as a hospital chaplain, I am constantly confronted with the mystery of life and death. What most of all strikes me is our fragility. The why of life, the why of our own lived experience and then the ultimate question, the why of death.

But on our life’s journey “the slings and arrows of outrageous fortune” – as Hamlet puts it – direct us along different roads. Why do some people choose good and others decide on another route? How free are we to take the road we travel? It’s part of the Christian mission-statement to say that we are saved by the grace of God. And grace is a freely bestowed gift. Maybe it makes sense to say that we have all been invited by God and it’s our decision to accept or reject the invitation.

We are all influenced by our surroundings, the people we meet, the time and place of our birth and so on. Surely freedom is always limited.

Just look at those closest to Jesus. Observe how they were so incapable of understanding what it means to be changed. If they had such difficulty with the idea of change, life, death and resurrection, how can it be any other way for us?

Life is one long mystery. But we believe. At times it can be almost impossible to understand but as Christians we say yes to God, we say yes to resurrection and this life of ours is a journey, a process, it’s a time of transfiguration, a time of constant change that reaches its fulfilment in the full and complete presence of God.

Life surely is all about growing, learning, developing, discovering new ways of doing things. It also involves us listening, listening to the now but also learning from the wisdom of the past. No one person, no one generation, knows it all. I much prefer to sit down and listen to the person who questions and queries, the person who admits to stumbling and failing but always gets back up again and walks with hope. Those who claim to know it all always disappoint.

The confusion of the disciples on that mountain is surely an endearing quality. It’s heartening to know that these men not only were confused but also got it all so wrong. Anything to do with God is almost completely beyond our grasp.

My prayer for the young man who said he is going to miss five World Cups is that he and all of us will realise on this journey of ours there’s so much to do en route. All the good we do will be transformed into a reality beyond our understanding in the full presence of God in the time of resurrection.