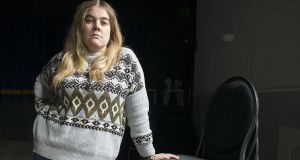 Grace Dyas, one of the signatories of the open letter. Photograph: Dave Meehan

Alleged sexual harassment, bullying and discrimination in the arts sector must be tackled, almost 200 artists have said in an open letter to the Arts Council and the Department of Culture.

“All forms of oppression in [the arts] ... are of concern to us,” say the 192 signatories who call for “acceptable standards of ethics and governance in the Irish arts sector.” They say Arts Council funding should be “withdrawn” from organisations where harassment is not addressed.

They say a “clear channel of complaint” to the council must be available for victims of harassment or bullying in council-funded organisations.

“This movement will be a public one and will not be silenced. It will also be a political movement and we will expect and seek support from our public representatives,” they say. “These issues involve State and taxpayer finances, potentially including in the silencing of injured parties.”

The letter comes on foot of a social media campaign started by poet Kathy D’Arcy under the hashtag #WakeUpIrishPoetry.

Instigating the campaign last month, she said: “The growth in power of a few giants has been encouraged to the extent that a culture of silence about unacceptable behaviour, exploitation and misconduct is inevitable. If I speak out about someone powerful in this world, there is no way back for me and there are no other options. Women I know have stopped writing for good because of it.”

The open letter came following a meeting of women artists at Doolin Writers Weekend in Co Clare at the end of January.

Ms D’Arcy and other signatories will meet the Arts Council next week. A spokesman for the council said this meeting was “to hear the concerns of the signatories and to clarify the role and work of the council. It is hoped the meeting will provide an opportunity to discuss areas of mutual interest and concern.

“We expect all funded organisations to adopt and implement workplace policies that seek to protect workers from all forms of bullying and harassment, and to promote a culture of safety, respect and dignity at work. Funded organisations are required to comply with all laws, including employment legislation.”

A spokeswoman said the department “welcomes the scheduled meeting between the Arts Council and the signatories next week on the matters raised”.

“Everyone working in the arts sector is entitled to work in an atmosphere in which respect, dignity, fairness and equality are the norm.”