Dublin church funeral fees to rise by 23% from January 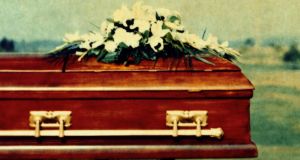 A spokeswoman for the Dublin archdiocese said the proposed changes were about bringing funeral payments “into line with statutory requirements”. Stock photograph: Getty Images

And new arrangements proposed by Dublin’s Catholic archdiocese for payment of the fees have raised concerns that pension and medical card benefits available to older church volunteers may be put at risk.

It has been the practice for undertakers to pay funeral fees individually to relevant parishes, priests, sacristans, etc, but from January 1st a lump sum will be paid electronically by undertakers to parishes on a monthly basis to cover such fees, with relevant tax, PRSI, and USC deducted at source.

As of January 1st, the standard funeral fee will be €400, an increase of more than 23 per cent. This will be paid electronically by undertakers to parishes. The priest will receive €100, with €100 going to the common fund and €200 to the parish, including payment to sacristans.

A sacristan with many decades’ experience working in a major Dublin Catholic parish said the proposed new regime would probably deter many older volunteers who carry out duties in parishes when people were away or on holidays.

He said it was “a big worry among the retired part-time sacristans that the taxation issues could cause them to lose medical cards, or affect their pensions”.

A spokeswoman for the archdiocese said the proposed changes were about “bringing such funeral payments into line with statutory requirements”.

Discussions had taken place with undertakers’ representatives and it was agreed “payments would be made electronically from the funeral director to the parish on a monthly basis”.

It was also decided that from January 1st sacristans would no longer receive cash payments directly from the undertakers “but instead they will be paid from the parish account”, she said.

This had been “communicated to all sacristans in writing”, the spokeswoman said. “Information sessions are also planned for sacristans with representatives from HR and finance so they are fully aware of the implications of the changes and as to how they may affect them,” she said.