‘Nursing homes are just a dumping ground for people like me. I believe the State has failed in its obligation towards me and others like me’ 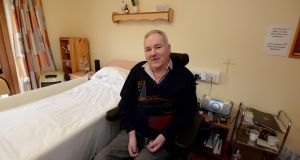 Kevin Barron: “I know I have so much more to offer if only I were back living in the community.” Photograph: Alan Betson

Kevin Barron was diagnosed with multiple sclerosis (MS) in his early 20s. By the time he turned 46 his condition had deteriorated, and he moved into a nursing home because his elderly parents could no longer care for him. Almost 15 years later, Mr Barron is still living in that nursing home.

The Dubliner, who is now 60, is staying in Kiltipper Woods in Tallaght, and while he acknowledges that it is a nice institution he feels very disconnected from other residents.

“I was 46 at that time when I moved here, and I had no one to relate to at all. It was very difficult. I felt sad all the time. There was one lad I was friends with when I first came in, but then two others came to the home and they had a lot more in common because they were a similar age and they were all mad about the football.

“I just ended up going away because one of the guys was blocking me from the conversation. They didn’t want me there. Nobody really talks to me now.”

Mr Barron’s mother and father passed away in 2017 and 2013 respectively. He has one sister, who he describes as estranged and who lives in London.

He admits that he is lonely, and “can have a bad attitude sometimes”, which can make the staff unhappy with him. However, he adds that it is just because he wants the life he envisioned.

He was a practising solicitor who owned his own business before the MS worsened.

“I was really clever, the top of my class. Now I get 30 free minutes of stretching per week, the rest of the time I just spend in my wheelchair or my bed. I’m just desperate to get out of here.

“Nursing homes are just a dumping ground for people like me. I believe that the State has failed in its obligation towards me and others like me who just don’t belong in nursing homes.”

Mr Barron is not the only person placed in a home at a young age due to a chronic disability or condition. According to the Disability Federation of Ireland (DFI), there are approximately 1,310 people in similar circumstances.

Dr Joanne McCarthy, head of policy at DFI, said these stories and examples showed the “human cost” of this decision.

“It makes neither human nor economic sense to treat people this way. This is the unavoidable result of chronic underfunding of community services in the disability sector.

“Most people are unaware that 90 per cent of all disability health spending supports just 5 per cent of people with disabilities, usually in institutional settings. And yet there is a better way.”

Olga Estridge, service manager at MS Ireland, said this was an issue that was acknowledged in the sector and something it wanted to address.

The HSE said it could not comment on individual cases, but added that the health service was aware that there were “a number of people” with a chronic condition or disability who wished to live independently with appropriate supports.

“The HSE, working with the community healthcare organisations, makes every effort to accommodate people’s wishes and support them to move to the home of their choice with support based on assessed need,” a spokeswoman said. “However, resources are finite, and regretfully people may have to wait a period of time before their wish can be facilitated.”

The spokeswoman added that some people who have complex medical and social care needs could not always be provided with this care in a home setting or by family members.

Mr Barron wants to buy his family home, which has already been adjusted to accommodate his wheelchair, and which was put on sale after his parents died.

He said he would be “devastated” if the house was sold to someone else because it holds so many happy memories for him. In a bid to buy back the home and move out of Kiltipper he has set up a GoFundMe page.

“I know I have so much more to offer if only I were back living in the community. I have a great personality and sense of humour, and I would love to meet a nice girl, to marry and settle down with – hopefully in our family home.”

He added: “I have lost most of my life. I just want to go home, that’s all I want. It’s not fair. I’m heartbroken.”