Clients of the Capuchin Day Centre For Homeless People, Dublin are using the order’s chapel, the Capuchin Friary, to eat meals prepared by the centre. Sitting in the pews allows them to do so while maintaining social distancing. Video: Bryan O'Brien 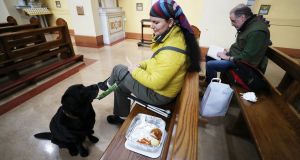 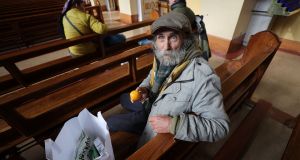 James Prior in the Capuchin Friary Church on Church Street. Photograph: Nick Bradshaw

A Dublin church has opened its doors, and pews, to homeless people who need a place to eat during the coronavirus outbreak.

St Mary’s of the Angels, on Church Street, Dublin is now serving as a makeshift dining room as most homeless cafes and food centres across Dublin close in an effort to stem the spread of the virus.

Early afternoon finds up to 20 people, seated apart on separate pews, eating in silence or whispering to each other. Most have collected a meal from the Capuchin Day Centre around the corner, which is now providing packed meals instead of breakfast and dinner in its dining room.

The centre normally provides meals to about 800 of the city’s poorest people in its busy dining hall, but closed it last weekend on the advice of its medical director.

The decision was made just a day after co-ordinator Alan Bailey had told The Irish Times such a measure would happen only in a “Doomsday scenario”.

The centre remains feeding as many people as before; Mr Bailey estimates about 300 packed breakfasts and 500 packed lunches a day.

Breakfast includes sausages, bacon and hash browns, along with a cup of soup, fruit and milk, while lunch includes a hot dinner in an aluminium box, a yogurt, small carton of milk, a piece of fruit and a bag of crisps. Disposable cutlery is included.

The church is warm and peaceful. One of the diners, finished his lunch, lowers his head and appears to pray. Another man is lying on his pew, resting.

Noel, who does not give his surname, is in his 60s: “I came in here, as you can see, to have my lunch. It’s very comfortable. The heating is on, and the lunch was tasty – bacon and cabbage and mashed potato.” Though he is not homeless, he has “just a small room, no cooking facilities” and the church is “nicer”.

Asked what he would do if the day centre had stopped providing meals, he hesitates. “I’d possibly have to go and try to buy a loaf of bread, some butter and jam . . . I’m retired. I did a bit of everything, DIY stuff . . . I do go to church though I know for some people coming to a church might be a bit different,” he smiles.

Two centre staff are at the church entrance, asking all entering to use the hand-sanitiser provided, while two others are continually cleaning down the pews with antiseptic fluid. Outside, another person is spraying antiseptic around the entrance.

“It is quiet now but it was a lot busier earlier. I’d say we had about 60 here today,” says one of the staff. “It’s working well. We just tell people not to sit beside each other.”

Some, however, do not want to go to the church. Harry, also in his 60s, collects his parcel. He will eat his lunch in a park as the weather is fine. “This is very, very helpful. I’ll have to eat this outside now. I’ve no choice. I’ve nowhere else to go. Everywhere is closed. I’d rather not go to a church.”

Two young men, from Balbriggan, plan to eat their lunch sitting on the boardwalk by the Liffey.

“It is getting worse every day. Everything is just being closed down. We used to chill in here,” says one, gesturing to the closed hall. “We just have to stay outside now because our hostel, we have to stay out between 9am and half six in the evening. It is dangerous now to stay outside with this virus but we have no choice.”

Other Dublin homeless day services, like the Merchants Quay Ireland cafe, have also closed, providing takeaways instead. The Little Flower Penny Dinners on Meath Street is continuing its meals-on-wheels service but has closed its dining room, serving instead takeaway lunches.

Focus Ireland, which runs a coffee shop and family drop-in centre, is keeping both services open albeit with reduced numbers allowed on premises at a time, to maintain social distancing.

The Mendicity Institution at Usher’s Island, which sees significant numbers of people from Eastern Europe, remains open and is feeding about 100 people a day. Its chief executive, Louisa Sontoro, says the good weather means they can ask people to eat quickly and go back outside.

“But if the weather gets bad, if it’s pouring rain, it is going to be very difficult. Almost all the people we have each day have to leave their hostel for the day. They must be provided with 24-hour beds during this emergency.”

The Peter McVerry Trust is providing more than 800, 24-hour beds for single adults, in Dublin and Kildare. “Our information and advice centre has closed and staff are working with people who use that service by telephone,” said a spokesman.