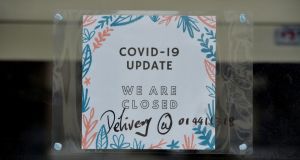 A closed shop in Malahide during the Covid-19 pandemic. Photograph: Alan Betson

Employers who temporarily lay off workers because of coronavirus will not be refunded for paying them anything over and above the new Covid-19 unemployment payment of €203 per week offered by the State.

When the new payment scheme was announced on Sunday, the Department of Social Protection said it was “asking employers, if at all possible, to continue to pay workers during this period – at least at the jobseeker rate of €203 per week” and they would subsequently be entitled to have the money refunded.

The department confirmed on Thursday that employers who temporarily laid staff off and paid them over this amount would not qualify for a refund.

A department spokeswoman said: “If an employer tops up the €203 per week at all they will not qualify for any reimbursement under the scheme.”

Employers in the hardest-hit sectors say that as a result they will be forced to “abandon staff to poverty” as up to 140,000 people are laid off due to the impact of the virus.

In the past week 50,000 pub workers and up to 25,000 childcare workers were effectively laid off overnight after pubs and creches were ordered to close.

The Licensed Vintners Association, which represents Dublin publicans, say their phones have been “in meltdown” since details of the Covid Employer Refund Scheme were provided on Wednesday, following its announcement on Sunday.

Early Childhood Ireland, which represents 3,800 providers, said it was “extremely concerned” and was “urgently seeking clarity”. Director of policy Frances Byrne said “the number one issue for members this week is paying and retaining staff” through the crisis.

“Hundreds of members would like to pay their workers over and above the €203 but as things stand it appears they won’t be able to.”

Under the new scheme employers who continue to pay their laid-off staff the equivalent of jobseeker’s benefit – €203 per week – will be reimbursed by the Department of Social Protection, via the Revenue Commissioners.

Groups such as the Licensed Vintners Association and the Vintners’ Federation of Ireland urged members to “look after staff where they could” by topping up to pay more than the basic jobseeker’s rate, says Donal O’Keeffe, chief executive of the LVA.

Mr O’Keeffe said his members have now been told if they do top up the basic rate they will not be reimbursed at all.

“We are highly concerned about the impact this is going to have on the employers who want to look after their staff, pay them a decent amount. They are being treated inequitably. And it puts us in an invidious position because it looks like we have been giving out incorrect information.”

One Dublin pub owner who can afford to pay his staff their full wages while he closes said: “I’m lucky but there are many more of us out there who will be forced to abandon their workers to poverty if this is not sorted.”

Brian Foley, VFI spokesman, said there were a number of issues with the scheme and “this is certainly a major one”.

“Overall it is a good scheme, and we want to support it, but this is the big issue for our guys today.”

Tara Buckley, director of retail lobby group RGDATA, said her members were less affected so far than publicans, with many having to reduce employees’ hours rather than lay them off.

“Our understanding is that this payment for laid-off workers must be the only payment being made to them and cannot be topped up. Our members are still open so we have not had a lot of queries about laying off workers yet.”

A spokeswoman for Revenue said it had “worked closely with the department” and pay-roll software providers.

“The scheme reimburses employers who pay the Covid Pandemic Unemployment Payment of €203 per week directly to employees who have been temporarily laid off.”