Boris Johnson is gambling with the health of his citizens

UK prime minister Boris Johnson has ordered pubs, restaurants, theatres, cinemas and gyms to shut their doors in a bid to slow down the accelerating spread of Covid-19. 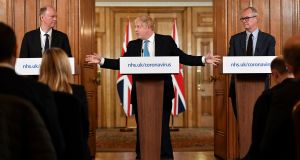 Boris Johnson breezed in to his daily press conference in the state dining room at 10 Downing Street on Thursday bursting with good news about the coronavirus. He said the first British patient with the virus had entered a randomised trial for drugs to treat it and that British scientists hoped to start trials on a new vaccine within a month and the number infections could begin to decline within 12 weeks.

“I believe a combination of the measures that we’re asking the public to take and better testing, scientific progress, will enable us to get on top of it within the next 12 weeks and turn the tide,” he said.

He claimed that testing for coronavirus, also known as Covid-19, could increase from the current rate of 5,000 a day to 250,000 a day and that the limited social distancing measures his government had introduced were working. Moments later, however, he admitted that he could not say for certain that infections would be on a downward slope by the end of June.

“We don’t know where we are, we don’t know how long this thing will go on for. But what I can say is this is going to be finite, we will turn the tide and I can see how to do it within the next 12 weeks,” he said. “I’m often accused of being unnecessarily boosterish about things and I certainly don’t want to strike that note today.”

Johnson was flanked at Thursday’s press conference as usual by his chief medical officer Chris Whitty and chief scientific adviser Patrick Vallance. In the early days of the crisis, these two men acted as a shield for the prime minister, offering reassurance that his government’s policies were being driven strictly by scientific advice.

But in the past two weeks, as Britain’s approach has appeared to diverge from that of most neighbouring countries, the scientific advice itself has come under scrutiny, and Whitty and Vallance themselves have been accused of acting too late and too feebly to curtail the spread of the virus.

Vallance caused alarm last week when he seemed to endorse the idea of developing “herd immunity” against the virus by allowing most of the population to become infected.

“Our aim is to try and reduce the peak, broaden the peak, not suppress it completely; also, because the vast majority of people get a mild illness, to build up some kind of herd immunity so more people are immune to this disease and we reduce the transmission, at the same time we protect those who are most vulnerable to it. Those are the key things we need to do,” he said.

Although the strategy of seeking herd immunity has been condemned by some as a Darwinian exercise in the survival of the fittest, its purpose is the exact opposite. It is for the old and vulnerable to be isolated and protected while the healthy contract the virus and become immune to it until so many are immune that it cannot reproduce itself by being passed on.

Although health secretary Matt Hancock insisted last weekend that herd immunity had never been the government’s policy, there is no doubt that the plan was to spread infections over a longer period (“to flatten the sombrero”, in Johnson’s words) mostly by mitigating its spread rather than suppressing it.

Suppression means trying to reduce the average number of people each person with the virus infects to below one, thus reducing infections to a very low level or stopping them altogether. Mitigation aims to reduce the health impact of an epidemic rather than halting it, targeting resources at the most vulnerable while population immunity builds up.

The folly of the British approach was spelled out on Monday in a report by Neil Ferguson’s team of epidemiological modellers at Imperial College London. It said that if Britain did not introduce tougher measures aimed at suppressing the virus, the epidemic could kill up to a quarter of a million people.

“We find that that optimal mitigation policies (combining home isolation of suspect cases, home quarantine of those living in the same household as suspect cases and social distancing of the elderly and others at most risk of severe disease) might reduce peak healthcare demand by two-thirds and deaths by half. However, the resulting mitigated epidemic would still likely result in hundreds of thousands of deaths and health systems (most notably intensive care units) being overwhelmed many times over,” it said.

“Suppression will minimally require a combination of social distancing of the entire population, home isolation of cases and household quarantine of their family members. This may need to be supplemented by school and university closures, though it should be recognised that such closures may have negative impacts on health systems due to increased absenteeism.”

Downing Street insists that all the measures it is now taking, including social distancing and school closures, were always part of the plan. But there is no doubt that their introduction was accelerated after the Imperial College report.

“The idea that we can contain it to the UK and then it goes away, doesn’t strike me as terribly plausible,” he said.

“Look around the world, look at the maps and then ask ‘Is this virus going away?’ I think that is a self-answering question.”

One sign of Britain’s distinctive approach is its focus on developing an antibody test to show who has already had the virus and is probably immune to it. Johnson said this week that his government was in negotiations to buy the test, which would work like a pregnancy testing kit.

“It’s early days, but if it works as its proponents claim then we will buy literally hundreds of thousands of these kits as soon as practicable because obviously it has the potential to be a total gamechanger. Because once you know that you have had it, you know that you are likely to be less vulnerable, you’re less likely to pass it on, and you can go back to work,” he said.

Johnson’s bumbling, jokey persona is poorly suited to a crisis of this nature and he has struggled to rise to the occasion over the past two weeks. The political operation that helped him win a big majority in December’s election is built around a group of former Vote Leave operatives who thrive on conflict and division.

Downing Street realised last weekend that anonymous briefings were confusing its message and fuelling public anxiety, as well as giving the impression that nobody was really in charge of the government’s strategy. And on Monday, Johnson’s director of communications Lee Cain acknowledged that a divide-and-rule policy of briefing some news organisations while boycotting others was counterproductive in a national crisis.

He told political journalists that he wanted to “reset” relations between Downing Street and the press for these unprecedented times.

“The slate is wiped clean. It doesn’t matter what political spectrum any of us are on or who you write or work for whatever, we will deal with everybody the same with an entirely transparent position,” he said.

In following his experts’ advice – something his critics feared he would not do – Johnson has tethered his political fortunes to the strategy embraced by Whitty and Vallance. These two brilliant men, both of them among the most distinguished doctors in their fields, have chosen a strategy that is at odds with the World Health Organisation’s (WHO) advice.

Britain hopes that the new social distancing measures it introduced this week, closing schools and encouraging people to stay away from bars and restaurants, will keep the death toll below 8,000. But Whitty warned on Thursday that things will look very bad at first.

“There will be a period until we’ve ramped our testing up in the community where if you just divide the number of cases we identify by the number of people who die, it will look as if the mortality rate in the UK will be quite high. I am expecting that to happen. That’s because that is the way we are collecting the denominators is people who have severe or fairly severe disease, rather than all comers. Over time, that will shift,” he said.

The strategy is a risky one, for Whitty’s reputation, Johnson’s political future, Britain’s economic prospects and above all, for the health of those most vulnerable to a virus that runs out of control.