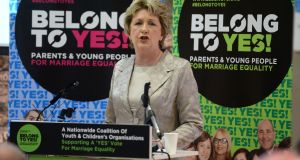 Catholic Church teaching on homosexuality must now be revised as a matter of urgency, former president Mary McAleese has said following comments by Pope Francis in support of civil unions for same-sex couples.

In a documentary, Francesco, premiered at the Rome film festival on Wednesday he said: “Homosexual people have a right to be in a family. They are children of God and have a right to a family. Nobody should be thrown out or be made miserable over it. What we have to create is a civil union law. That way they are legally covered. I stood up for that.”

In 2015, following the referendum which legalised same-sex marriage in Ireland, Catholic primate Archbishop Eamon Martin said the church felt a sense of “bereavement”. Then Vatican secretary of state Cardinal Pietro Parolin described it as a “defeat for humanity”.

In a 1986 document retired pope Benedict XVI described homosexuality as “a more or less strong tendency ordered toward an intrinsic moral evil; and thus the inclination itself must be seen as an objective disorder.”

Responding last night to the civil union comments by Pope Francis, Mrs McAleese said that if his words were “as quoted and attributed, it means that church teaching in relation to homosexuals and homosexuality requires, urgently, to be revised”. Mrs McAleese campaigned for same-sex marriage in the 2015 referendum campaign.

But, she pointed out “the church does not prepare dogma or doctrine via documentaries. That happens when the pope sits down behind his desk.”

The pope’s comments “follow years of misery and homophobia suffered by LGBTIQ people who, with the Catholic people, have turned the tide,” she said.

“ The pope has seen that tide. Let him now follow through.”