Former pontiff sped through area ‘faster than a joyrider’ 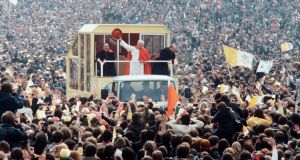 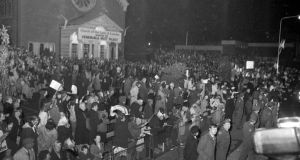 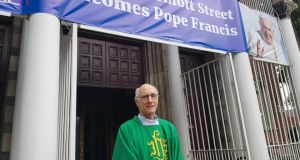 During his 1979 visit to Ireland, Pope John Paul II had planned to stop on the street to visit Matt Talbot’s tomb in Our Lady of Lourdes church. However, the Popemobile was running behind schedule and drove on, much to the disappointment of many local people. Some said afterwards joyriders did not go down Seán McDermott Street as fast.

“The story still persists, of course, of how people were waiting for Pope John Paul to stop,” said Fr Hugh O’Donnell at the church on Sunday.

“The significance of a stop, no matter how brief, is very important. In some ways it’s a corrective, almost. The expectation was there in ’79, that he would stop,” he said.

Fr O’Donnell said Pope Francis’s visit, which would follow his meeting at Dublin Castle with Taoiseach Leo Varadkar and other members of the Government, was not an official stop.

“He won’t be saying anything. He won’t even come into the church. So, I would say it’s more a symbolic gesture, a very reassuring gesture for the people of the area.

“Also we have the tomb of Matt Talbot here who is a real symbol of, an exemplar of, someone who dealt with addiction in a particular way. He’s well known all over the world, even more so I think than locally.”

Matt Talbot was an alcoholic from the area who gave up drink at 28 and lived a life of prayer and fasting. He died in 1925, aged 69, and was declared Venerable by Pope Paul VI in 1975.

The last Magdalene laundry in Ireland is near the church. Known as the Gloucester Street laundry, it closed in October 1996. “Yeah, we’ve all that past history of difficulties. We try to move forward,” said Fr O’Donnell.

A Salesian priest, he said the Salesian community had been “looking after the parish for the last 25 years or so”.

“The people are wonderful,” he said. “Any funeral we have is so well attended. The people are very supportive of each other. There’s always a very good vibe, it’s a very welcoming place. I enjoy saying Mass here, I love meeting people. It’s my 15th year.”

Fr O’Donnell said Pope Francis’s visit would be “very brief. I think he’ll be on his way to the pro-cathedral. He actually has a stop off there,” he said.

Pope Francis will visit the pro-cathedral on Marlborough Street at 3.30pm that afternoon where he will spend 45 minutes meeting recently engaged and married couples from all over Ireland. He will then go to the Capuchin Day Centre on Bow Street for a “private visit”.