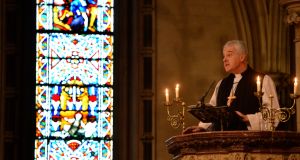 Church of Ireland Archbishop Michael Jackson says unrestricted access to abortion in the first 12 weeks is “not an ethical position we can accept”. Photograph: Dara Mac Dónaill/The Irish Times

The Church of Ireland’s two archbishops have said they cannot accept an Oireachtas Committee proposal to allow unrestricted abortion during the first 12 weeks of a pregnancy.

They could not accept unrestricted abortion at any stage of pregnancy, they have said.

It means that all four main churches in Ireland are now opposed to the recommendation of the Oireachtas Committee on the Eighth Amendment.

The Catholic Church has expressed “vehement opposition” to abortion in all circumstances while the Presbyterian Church in Ireland, as expressed by former moderators Rev Drs Trevor Morrow and Norman Hamilton last month, was “very gravely concerned” about the Committee proposal “to introduce abortion with no restriction as to reason until the twelfth week of gestation, and beyond 12 weeks on health grounds”.

In a statement last month also the Methodist Church in Ireland said “our opposition to abortion on demand includes this first trimester”. The church has “consistently been against abortion on demand,” it said.

The Church of Ireland primate Archbishop Richard Clarke and Archbishop of Dublin Michael Jackson acknowledged in a statement on Monday “the dilemma faced both by legislators and by medical, nursing and healthcare practitioners with regards to access to unrestricted abortion during the early months of pregnancy.”

“However, unrestricted access to abortion in the first 12 weeks of pregnancy, or indeed at any stage, is not an ethical position we can accept.”

They say they favour “modification” of Article 40.3.3 of the Constitution to allow the Oireachtas address in law the termination of pregnancy, the rights of the unborn and the rights of the pregnant woman “within clearly defined boundaries and parameters”.

Current legislation should be strengthened to ensure the needs of pregnant women facing difficult situations can be addressed quickly and comprehensively through improved support services, they said.

“Too often in this debate the voice of women has not been heard,” they acknowledge. “The church will seek to continue to care for and pastorally stand alongside women, and their partners and families, who face immensely difficult situations and dilemmas.”

More generally, they say, “the tradition of the Church of Ireland would reject an unrestricted access to abortion, while being concerned to ensure provision for hopefully rare circumstances and in a secure medical setting. Where individuals draw such a line will inevitably differ”.

“Instances where the life of the woman is at serious risk have long been regarded within Church of Ireland teaching as situations where termination of a pregnancy would be justifiable. For some, pregnancy after sexual crime or the medical certainty of fatal foetal abnormality might also be seen as circumstances where abortion could be considered as justified.”

Meanwhile, the Catholic Bishop of Waterford and Lismore Alphonsus Cullinan has responded to criticisms of comments by him on abortion and suicidal ideation by Senator Catherine Noone, chair of the Oireachtas Committee on the Eighth Amendment.

In a letter to this newspaper on Tuesday he says “there is no literature which shows abortion is accepted by any authority as a reputable evidence-based treatment for suicidal ideation.”

Suicidal ideation “is used as an excuse to abort, but no data shows it to cure such ideation and the Irish College of Psychiatrists do not accept (not to mention endorse it) as a recognised treatment”. Rather data showed “that abortion causes mental health problems”.

Women who testify that “abortion seriously affected their lives in many ways including their mental health” often found it hard to be heard in public and “were not invited to speak in front of the Oireachtas committee”.