Politicians and media accused of trying to destroy Catholic Church 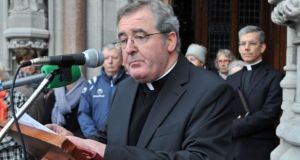 Bishop of Cloyne William Crean: Speaking at the ordination of nine seminarians as deacons in Maynooth. Photograph: PA

A Catholic bishop has accused politicians and media in Ireland of seeking the destruction of the church and its elimination from public debate.

“Ireland through its political and media establishments seems determined to eliminate the engagement of the Catholic Church in the public sphere,” said Bishop of Cloyne William Crean.

“There are many in these systems who have developed a gratuitous cynicism towards the Catholic Church and desire its destruction, believing that it stands between the people and Ireland becoming a progressive society,” he said. He advised “our response ought always to be positive”.

Bishop Crean was speaking at the ordination of nine seminarians as deacons in Maynooth. This ceremony usually takes place a year before ordination to the priesthood.

Meanwhile, at Corpus Christi ceremonies in Co Galway the Archbishop of Tuam Michael Neary said the Church was now often just dismissed while the real challenge in Ireland today was not atheism but idolatry, adoration of false gods.

“The Church is no longer the dominant intellectual influence in society, can no longer count on cultural or political support and is frequently dismissed and disregarded,” he said. He continued that “not surprisingly in this situation greed overcomes gratitude while selfishness frequently displaces compassion”.

It was the case that “in our culture today perhaps the real challenge is not atheism but rather idolatry, that is the worship of false gods whether it be money, a selfish and self-centred lifestyle or pleasure,” he said.

Warning against the “huge temptation to assimilate, to accept and conform to the dominant values which are at variance so often with our faith” he noted that in such a situation “it is so easy to pick and choose between different aspects of our Christian faith, to acknowledge publicly what may be popular at a given time but to discard what is no longer regarded as ‘cool’ in our culture”.

Confinement of faith to the private sphere, while behaving with “the kind of expediency which is afraid and ashamed to acknowledge the place which religious faith plays in the marketplace of our world,” was “a kind of double standard”, he said.

He has seen “this attitude borne out in many interviews where people are shy about acknowledging their faith, their value system, particularly if that value system has a religious basis”. But if people “attempt to separate faith from life then we do an injustice to both. Faith and life impinge on each other, influence each other, challenge each other,” he said.