‘People in cities just don’t have time for religion’ 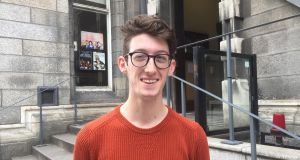 New census data on religion was published by the Central Statistics Office on Thursday. Jenna Clarke-Molloy spoke to people in Trinity College, Dublin about the facts and figures.

Kyle Chambers from Donegal said he saw how religion played a larger part in people’s lives in rural areas. “I think that makes sense. I’d identify as Catholic and I think in rural areas a lot more social events and relationships with families and friendships revolve around the parish.”

When told that 10 per cent of people declared themselves to not be affiliated with any religion, Chlora Hall from Ringsend did not find this surprising. “My peer group, we’d all be of no religion, but for schools for our kids we’d all tick the box for Catholic. We’re not practising though.”

On the increase in the number of people declaring no religion, Ian Sanders from Dublin was unsurprised. “I think it’s a general trend that people are leaving religion behind a bit. The number of wedding and funerals I’ve been to recently where there’s been a humanist celebrant, they seem to be becoming more popular.”

When asked why he thought that the average age of Catholics and Church of Ireland followers was much higher than that of Muslims or Orthodox people, Mr Sanders attributed it to younger immigrants coming to Ireland. “I guess that’s due to these particular groups being relatively recent immigrants, and their young families”.

Ruairi O Siochru from Tralee, Co Kerry, feels that young people aren’t interested in religion. “I suppose a lot of the younger generation wouldn’t identify as religious, they probably would have ticked the ‘no religion’ box.” He feels this could be the reason for the 73.6 per cent increase in the number of people claiming no religion, and why the average age of Catholics and Church of Ireland followers is so high compared to others.

The census found that Dun Laoghaire-Rathdown had the lowest proportion of Catholics, while Offaly was the area with the highest concentration of Catholics. This was unsurprising to O Siochru. “Coming from Kerry, people in the country are very religious, and people in cities just don’t have time for religion, by the looks of it.”

Niamh Keating from Westmeath was unsurprised to see the increase in the proportion of people claiming no religion. “I’ve definitely noticed that among young people. I’d be a lot less religious than my parents and my friends would be the same.”

Ms Keating feels that the data surrounding religion for the census should influence public policy especially in terms of school planning.

Roslaie Engels from Germany believes that 10 per cent is quite low for the number of Irish people claiming no religious affiliation. “ I think over half of the student population would say they have no religion so 10 per cent overall is quite low.”

The increase in the number of religions not traditionally associated with Ireland is not surprising to Engels. “I think in Europe as a whole, other religions are on the rise because people are moving from country to country.”

Reidin Doyle from Cork agrees that 10 per cent may not be an entirely accurate figure for those without a religion. “I think there’s probably still a big gap between people who are practising and those who are culturally Catholic. I think it definitely reflects the way Irish views are going. ...I don’t think most Irish people get their morality from Catholicism, I think they get it from other sources.”

Ms Doyle believes that a more diverse religious landscape in Ireland can only be a good thing in bringing a “more balanced view” to society.

Trisha Cusack from Limerick feels that young people from other faiths may be more proud of their religion than Catholic and Protestants. “I think while most young people were baptised into the Catholic Church or Church of Ireland, people don’t practise it, so they don’t feel they are representative of Catholics. I don’t really know many Muslims or Orthodox people, but I’d imagine they’re more proud of their religion, especially with the scandals of the Roman Catholic Church in recent years.”

Ms Cusack is unsure how to feel that that fewer people aren’t claiming any religion, “but I think it is definitely representative of young people. Growing up, I went to mass every single Sunday, but now I only ever go to Christmas Mass. I don’t go anymore because I think the Church as an institution has too many faults. I don’t practise, but I still believe in God.”

Ms Cusack thinks the results of the census will affect public policy in the future, particularly in the area of education.

On the average ages of Christian versus those of other religions, Jasmine Hyland from Naas, Co Kildare was intrigued. “I’d imagine it has something to do with the number of immigrants who are Muslim, compared to other religions. I imagine that as a country we’re probably going to have become more tolerant if it continues like this, particularly in areas outside of Dublin”.

Dominic McGrath from Omagh, Co Tyrone was interested in statistics surrounding the average age of Catholics and protestants versus those of other religions. “I’m surprised at the average age of Catholics, I thought it might be older. I know a lot of younger people aren’t that interested in religion, they don’t regularly attend church services or anything, so I’m a bit surprised with that. I imagine in a few years that will get higher.

“I guess that means that our school system needs to change. Obviously there’s a lot of talk about the Baptism barrier in schools, I’m glad we’re having the conversation, but I don’t think we’re there in creating policy or thinking about it properly.