Murphy says 5,900 units would be provided next year, but last year Coveney indicated 5,869 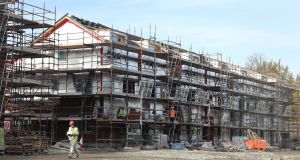 Minister for Housing Eoghan Murphy has said some 5,900 new “units” of social housing would be provided next year by local authorities and approved housing bodies, either through building or acquisition. Photograph: Niall Carson/PA Wire

Measures announced in Budget 2018 will lead to the provision in 2018 of just 31 social homes over and above the number committed to last year by the Government, figures obtained by The Irish Times show.

In his budget briefing on Tuesday, Minister for Housing Eoghan Murphy said some 5,900 new “units” of social housing would be provided next year by local authorities and approved housing bodies, either through building or acquisition.

Figures supplied to The Irish Times last October by the Minister’s predecessor Simon Coveney show the target for 2018 at that stage, under his Rebuilding Ireland plan, was for 5,869 social housing dwellings.

These were to be comprised of 4,119 built, including through construction, voids refurbishment and acquisition through the Part V process, where a developer has to sell 10 per cent of homes on a development to a local authority at a reduced rate, and 1,750 acquisitions.

In addition, according to the figures supplied last year, some 2,000 social homes were to be acquired in 2018 through long-term leasing.

“The difficulty we have is many of us had an expectation after the appointment of Mr Murphy and after comments from the Taoiseach, that they were going to go above and beyond the targets announced by Simon Coveney a year ago.”

He said it was questionable whether the targets had increased at all, or whether numbers were just being rounded off.

Several organisations have also criticised the budget’s “over-reliance” on the private sector to deliver social housing next year.

Of the 25,500 new “social housing” tenancies to be provided next year under the budget, 19,600 – almost 80 per cent – will be through subsidised supports for households in the private rented sector. Most of these will supported with the Housing Assistance Payment (HAP).

Donal McManus, chief executive of the Irish Council for Social Housing, described as “worrying” the level of reliance on HAP.

“We need to question our approach here. Expanding the HAP programme, which relies entirely on the private rental sector, is worrying. There isn’t enough rental stock out there,” he said.

“On Budget Day there were 1,123 properties to rent on Daft.ie for the whole of Co Dublin. Of these, only 100 were under the HAP maximum rate of €1,300 for a family with three children, and almost all were one-bedroom units.

Fr Sean Healy, director of the think-tank Social Justice Ireland, said: “Government needs to get past its belief that the private sector is going to do these jobs, like solve the homelessness and housing crisis, for them. It never has and it never will. It will not provide the infrastructure required.”

He said the promise of 3,800 directly-built social houses was “totally inadequate”, given there were “well over 90,000 households” on the social housing waiting list.

He said: “The problem with increasing HAP is, that doesn’t provide a single additional home. We need a substantial increase in social housing provision. We are going to see homelessness continue to rise until there is a fundamental change in Government thinking on housing.”

Mr Murphy, speaking on RTÉ radio, said it seemed Mr Ó Broin “doesn’t understand” housing figures. He said the target of 47,000 new social housing units by 2021 committed to in Rebuilding Ireland had been increased to 50,000.

His concern was that there would be no increase next year beyond the Rebuilding Ireland targets.

New evidence emerges in shooting dead of teenager in Belfast in 1972 01:00
Study finds retail workers serving customers have fivefold risk of Covid-19 23:55
IMO to consider ballot for industrial action when it meets on Friday 22:35
Restrictions on religious services to stay after archbishops meet Taoiseach 21:52
Postmortem results on mother and two children found dead in Dublin due on Friday 21:28