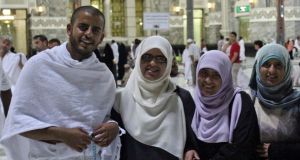 Ibrahim Halawa is set to receive a consular visit from the Irish Embassy in Cairo in the coming days, it has been confirmed.

The Department of Foreign Affairs told The Irish Times that the Irish Embassy in Cairo had received authorisation for a consular visit with the 21-year-old.

It is understood the visit with Mr Halawa will take place this weekend.

However, the Egyptian legal authorities have not yet begun to process the paperwork for Mr Halawa’s release from jail.

The Department of Foreign Affairs said both it and the Irish embassy in Cairo remain “focused” on providing every possible support to Mr Halawa so that he can return to Ireland as soon as possible.

“The Taoiseach has written to Egyptian president el-Sisi requesting his assistance to expedite the process. Minister Coveney has also been in direct contact with his counterpart, foreign minister Sameh Shoukry, about the issue,” a department spokesman said.

“There remain a number of procedural steps to be gone through before Ibrahim is able to depart Egypt, and the Irish authorities and Ibrahim’s legal representatives remain in ongoing contact with the Egyptian authorities on this process,” he added.

The department noted that the government share “the widely held sense of frustration” at the delay in Mr Halawa’s release by the Egyptian authorities, following his acquittal in Cairo.

Mr Halawa has spent more than four years in jail. The then 17-year-old teenager from Firhouse, Tallaght, Co Dublin was arrested along with three of his sisters - Somaia, Fatima and Omaima - on August 17th, 2013 and hundreds of others at the Al Fateh grand mosque in Cairo during protests against the ousting of then president Mohamed Morsi of the Muslim Brotherhood.

The defendants were all facing the death penalty but none received it.

Instead, the judge sentenced hundreds to jail terms, including 43 people to life in prison, which in Egypt is 25 years, and five years of parole.

The department noted Mr Halawa and his family had asked it not to disclose any details relating to his return to Ireland, including travel arrangements, until he is back in the country.