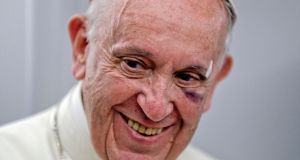 Pope Francis smiles as he talks to journalists during a press conference on September 11. Photograph: Andrew Medichini/AFP/Getty

The missal used at Masses may be given a more user-friendly re-write by Ireland’s Catholic bishops after a ruling by Pope Francis.

The decision by the Pope to return all authority on liturgical translations to local bishops’ conferences, including of the missal used at Masses, has been warmly welcomed by the Association of Catholic Priests in Ireland (ACP).

The response to “The Lord be with you” was changed from “..and also with you” to “...and with your spirit” while opening three sentences of the Third Eucharistic Prayer was replaced with one 72-word sentence.

In 2001, under Pope John Paul, the Vatican issued the document Liturgiam Authenticam which laid down new principles for the translation of the Latin Mass which required literal translation from Latin. This led to the guidelines used to produce the 2011 missal which in turn replaced one introduced to Ireland on St Patrick’s Day, 1975, when Paul VI was Pope.

“The ACP has long supported the flexibility to adapt the liturgy to local customs and realities as promised by Vatican II and campaigned against the recent new English translation of the Mass – ‘the New Missal’ – as a backward step with its lack of inclusive language, ecumenical sensibility and dependence on Rome,” the priests’ association said.

The move by Pope Francis “echoes concerns expressed by the ACP and others over liturgical translations in recent years,” it said. Noting that the Pope’s decision “will come into effect on 1st October 2017” the ACP hoped “our bishops will quickly take this matter in hand, so that Irish Catholics will no longer have to endure the very unsatisfactory translation of the liturgy currently in use.”

In 2011 the ACP described the new missal introduced by Pope Benedict that year in 11 English-speaking countries as sexist, archaic, elitist and obscure and called on the Irish Bishops to refuse to introduce it in November that year without first consulting laity and priests.

The Bishops responded however that the new missal was “set in stone”.

The ACP said then it was “gravely concerned that this literal translation from Latin has produced texts that are archaic, elitist and obscure.” Women would be “rightly enraged at the deliberate use of non-inclusive language,” they said and that the new translation perpetuated an “exclusivist, sexist language.”

Example of old and new text: The Third Eucharistic Prayer

Father, you are holy indeed, and all creation rightly gives you praise.

All life, all holiness comes from you through your Son, Jesus Christ our Lord, by the working of the Holy Spirit.

From age to age you gather a people to yourself, so that from east to west a perfect offering may be made to the glory of your name.

You are indeed Holy, O Lord, and all you have created rightly gives you praise,

for through your Son our Lord Jesus Christ, by the power and working of the Holy Spirit, you give life to all things and make them holy,

and you never cease to gather a people to yourself, so that from the rising of the sun to its setting a pure sacrifice may be offered to your name.