Lotto winning Mayo priest: God gave it to me for some reason and I will give it away 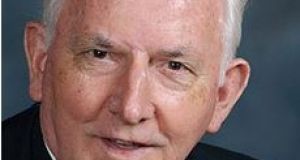 A Florida-based Irish priest at home on holidays for Christmas has won €500,000 in the EuroMillions Plus draw.

The Irish Times has confirmed he is Msgr John Delaney, originally from Farmhill, Crossboyne, near Claremorris in Co Mayo and a younger brother of sculptor Edward Delaney who died in 2009.

On Friday, the priest visited the National Lottery offices to claim his prize which he won on a “quick pick” ticket bought at Donnybrook Fair, Malahide, Co Dublin, last Saturday December 22nd, the same date as his niece’s birthday.

In a statement, Premier Lotteries Ireland, operator of the National Lottery, said the winner – whom the company did not name but whose identity was independently established by The Irish Times – joked that God must be listening to his prayers, as this was not his first lottery win.

He pledged to share his latest winnings with those in need.

After ordination in June 1964 then Msgr Delaney was assigned from All Hallows College in Dublin to Florida where he has spent all of his priestly ministry, mostly in Fort Lauderdale, as well as 15 years in Miami and a three-year term in Palm Beach.

The priest’s nephew, author and columnist Eamon Delaney, recalled on Friday night how in the late 1960s the then Fr Delaney became good friends with the Kennedy family who had a winter home in Florida.

He was a close confidante of Rose Fitzgerald Kennedy, mother of President John F Kennedy and Bobby Kennedy, both assassinated, in 1963 and 1968 respectively. Rose died in 1995.

Another nephew is married to Jill Evans who is the sister of U2 guitarist, David Howell Evans, better known as The Edge.

Msgr Delaney also retains strong Mayo connections and last August he was presented with a Mayo Cherishing the Irish Diaspora Award in Claremorris.

According to the Mayo News the awards ceremony was told that “Msgr John has always been immensely proud of his Mayo roots and had helped many people during his five decades in the ministry.”

It was also told the priest was “ always so proud to wear his distinguished red and green outfit when Mayo are playing in major games.”

On Friday, Premier Lotteries quoted him as saying “I suppose you can say I am lucky. But I have always had a policy of sharing my luck around. That is something that my late mother taught me, and something that was also drummed into me when I was a young priest by a Bishop. I am a big believer that what goes around comes around. This is a huge amount of money and I look forward to giving some back.”

Msgr Delaney heard last Saturday that one of the two winning EuroMillions Plus tickets was purchased in Donnybrook Fair, Malahide. “I didn’t get too excited when I heard this first. I went back to the shop and gave the ticket to the same girl I had purchased it from to be checked. Lo and behold, there was a message on the system to contact the National Lottery. So I knew at that stage I had won.”

He enjoys regular visits back to Ireland and said he had spent a lovely Christmas day with relatives in Dublin as he let news of his good fortune slowly sink in.

Ticket seller Tatiana Rusu at Donnybrook Fair, Malahide, said Msgr Delaney came back into the shop on Wednesday and told her he had won and would be collecting the winnings on Thursday.

“He said he won the €500,000 and he bought another two tickets. He said ‘I can’t wait to go to collect the money.’” Ms Rusu told him “if you’re gonna keep playing you’re gonna win again, you’re the lucky one.”

She knew he was not a local from Malahide and thought he may have been visiting for Christmas. The lucky shopper was on his own, and picked up a bottle of wine and some mince pies as well, Ms Rusu recalled. “He was lucky, that’s all I can say” she said, and described the buyer as “a nice gentleman”.

“All I said to him was I wish you all the best and good luck,” she said.

Msgr Delaney told The Irish Times on Friday night: “God gave it to me for some reason and I will give it away.”

1 World, look away now – these are dark days for the United States
2 Michelle O’Neill will not step aside ‘under any circumstances’ despite calls from other parties after Storey funeral
3 Health officials ‘very concerned’ about foreign travel, says Donnelly
4 ‘Grossly irresponsible’- Waterford mayor condemns house party of 60 people
5 Bobby Storey: The IRA's planner and enforcer who stayed in the shadows
Real news has value SUBSCRIBE

Pub substantial meal rules a ‘farce’ like being on set of Darby O’Gill and the Little People 13:47
Limerick people ‘grossly insulted ’ by Micheál Martin appointments, says Willie O’Dea 13:26
Michelle O’Neill will not step aside ‘under any circumstances’ despite calls from other parties after Storey funeral 13:24
State to pay costs of failed action over Seanad composition 13:16
Dara Calleary given Gaeltacht responsibility after controversy over Cabinet snub 13:09