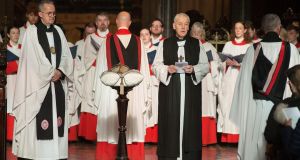 Archbishop Michael Jackson with the heart of St Laurence O’Toole, patron saint of Dublin, which was returned to Christchurch cathedral this evening after being stolen in 2012. Photograph: Dave Meehan

It was accepted by Archbishop of Dublin and Glendalough Michael Jackson, who then warmly shook Asst Commissioner Leahy’s hand in gratitude as the Cathedral choir sang Haydn’s Te Deum at a special evensong service to mark the heart’s return.

The 800-year-old relic had been stolen in March 2012 and was recently recovered by gardaí in the Phoenix Park. An investigation is ongoing. It had been kept in a wooden heart-shaped container sealed within a small iron-barred cage in St Laud’s chapel at the cathedral. The bars of the cage had been cut and it is believed the thief or thieves hid in the building overnight before taking the heart.

Last night Dean of Christ Church Dermot Dunne asked for forgiveness “if we appear triumphant” on “this very special occasion when we welcome the return of the heart of Laurence O’Toole to its proper place.”

The relic had been on display in Christ Church for generations, he pointed out, and had survived turbulent times in the cathedral’s – and Dublin’s – history.

He was “truly grateful” to all involved with the heart’s recovery but was “particularly grateful to An Garda Síochána for all their efforts in successfully locating the heart and safely returning it to us”.

It was their hope, he said, to set aside a special space at the cathedral for the heart by the feast of St Laurence on November 14th next. “I feel the heart has come back into this cathedral,” he said.

Speaking to The Irish Times earlier, Dean Dunne said he believed whoever took the heart had a motive. “Maybe they thought there was money in it, a ransom or whatever,” he said, though no communication of any kind from the thief or thieves had been received after it was stolen. They had heard “nothing. It just went completely dead,” he said.

Two weeks ago a Garda detective contacted him to say they thought they had found the heart. “I heard it was found in a field but I didn’t know it was the Phoenix Park.”

It was “in great condition. They [thieves] looked after it but I don’t think they touched it or tried to open it or anything.” It looked like “they wrapped it in plastic,” he said, and “there’s muck all around it. It is as it is. We didn’t do any cleaning job on it.”

Speaking to media, Asst Commissioner Leahy agreed he was personally surprised the relic was found. “I wasn’t hopeful but, in fairness to some of the people involved in the initial investigation, they stuck with it all along.”

Discovering it and bringing it back to the cathedral was “really, really a great moment for us,” he said. Asked whether it was found by gardaí, all he would say was that “ we achieve very, very little without the help of the community”. As an investigation was ongoing that was “as far as I’ll go in relation to this at the moment”.

He confirmed it had been found in the Phoenix Park. “That was the final resting place as far as we were concerned.” He felt “it could have been outdoors for quite a while and we were happy to see that it was wrapped in plastic because when we actually took it in and unwrapped it with the dean, it was totally undamaged.”

He was not sure whether whoever stole it knew what they were taking, “but it may have gotten to a stage where they decided it wasn’t good luck to have something of such significance,” he said.